Khat is big business in Ethiopia

Khat is a thriving business in Ethiopia. The country is the world's biggest exporter for the amphetamine-like leaf. Despite health risks, trade is so lucrative that it is unlikely to slow down any time soon. 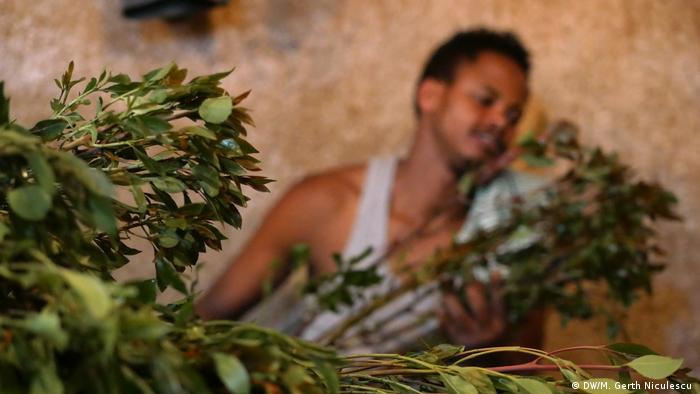 Jarra Teklay Yohannes had had just settled down on the floor of his office in Awoday – a small, carpeted room with belongings scattered around - when a young boy popped his head round the metal door. "Someone is missing at their post," he said.

"I have my people everywhere, it's all about information," Jarra said, his eyes still focused on the calculations of last night's income, a thick book lying on his lap. "Without trust, you can't run the khat business." It is a business worth millions in the highlands of eastern Ethiopia.

Located a few kilometers from the sacred Muslim city of Harar, Awoday is the world's biggest market for the amphetamine-like leaf, a stimulant said to enhance concentration and reduce tiredness while producing euphoria. An estimated $80 million (€71 million) are said to change hands on the market in one night alone, but it is impossible to track the true numbers.

The market operates 24 hours a day in a hustle and bustle of trucks, merchants and women who sell small amounts of khat on the roadside. Buildings are filled with teams of young men cutting, cleaning and packaging the branches in a mix of frenzy and trance. The peak of activity starts after sunset. "The sun burns the leaves, so the trucks need to be gone by early morning," Jarra explained. He usually works from about 7 p.m. until the early morning. "But during the busy season, I sometimes stay in my office for an entire month. My family comes to visit me here," he added. Time is really money in Awoday; khat has to be consumed within 48 hours of its harvest, after which the effect will be only minimal. 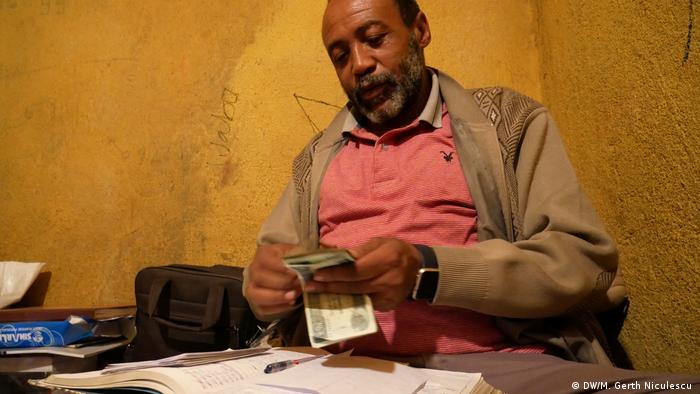 The cheerful 50 year-old Jarra is one of hundreds of traders who work in this booming business. They export the leaves to neighboring Djibouti or Somaliland. Some trucks also head to other Ethiopian cities, such as the capital, Addis Ababa, 500 km (310 miles) to the west. Jarra is proud to be one of the six most successful exporters, with seven trucks leaving every day to Somaliland. It's a lucrative business not only for the traders but also for the government. "Last night, I gave 40,600 birr [€1,268, $1,420] of my earnings to customs. For the biggest exporters, this can go up to $91,000 dollars for a single day. But it's a very tiny percentage of the total income," Jarra boasted. Many say the numbers are even higher and corruption is endemic. It is believed that the government earns much more from khat sales than it does from coffee, which is officially the country's first export product. "Ten times more," according to the trader, who is one of the few Christians in the khat business in Awoday. "But they will never say so, because some countries consider it to be a drug."

Many countries have banned the consumption of khat, although there are no international controls in place. In Ethiopia, especially around Harar, chewing khat is commonplace. "It's part of our culture and our life. If you want to make peace with someone, you 'khat and chat'. If you go to a wedding, or if you want to ask to marry my child, you bring khat."

Khat consumption can be traced back to Sufism, a branch of Islam widely practiced in Harar since its arrival in the 11th century. The leaf is now consumed by Muslims and Christians alike, and is very popular among students countrywide. The use of the psychologically addictive leaf has also become the symptom of a largely unemployed youth. It is common to see young men sitting at the roadside, chewing the green-reddish leaves. In Ethiopia, people consume about 400 grams (14 ounces) per day on average, and sometimes much more. 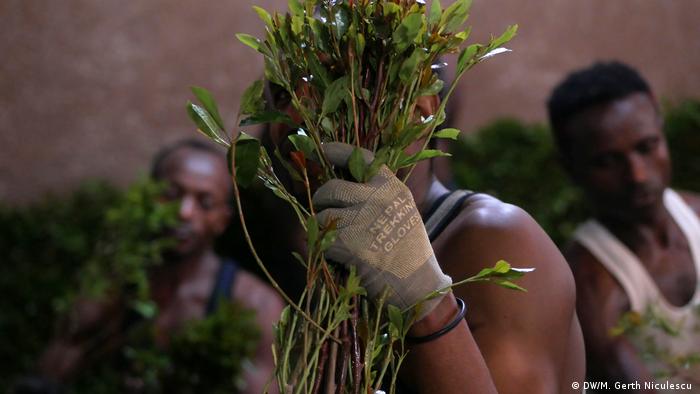 Activity around the khat business peaks during nighttime

Too much money at stake

"There is a problematic use of khat in the country. It is dangerous and produces adverse health consequences," says Ephrem Engidawork, professor of pharmacology at the University of Addis Ababa. He has been researching the health impact of khat for over a decade. He says about 20% of all Ethiopians chew khat to an extent that can have negative consequences for their health. "The most common adverse effect occurs on the cardiovascular system," the professor explains. "People experience myocardial infarction. That is the most deadly risk of khat chewing during a prolonged period of time." It is also believed to impact on the liver and teeth, and has psychological effects. "Prolonged use of khat is associated with schizophrenia. Many schizophrenic patients have a history of khat chewing. We also confirmed that in our animal studies," Ephrem said.

This public health aspect is not considered a priority by the government, judging by the lack of attention and resources it has set aside for research purposes. It has also shown no interest in regulating consumption. Ephrem said he once suggested creating a research institute for khat in order to address the challenge. But his idea "fell on deaf ears. Nobody is interested," he said.

Considering the amount of money khat presents for the country, it is unlikely that production and consumption will slow down anytime soon. On the contrary, more and more farmers abandon coffee and other crops to cultivate the stimulant. Currently, about 70% of agricultural land in the Harari region is allocated to khat.

Proud to be a khat grower 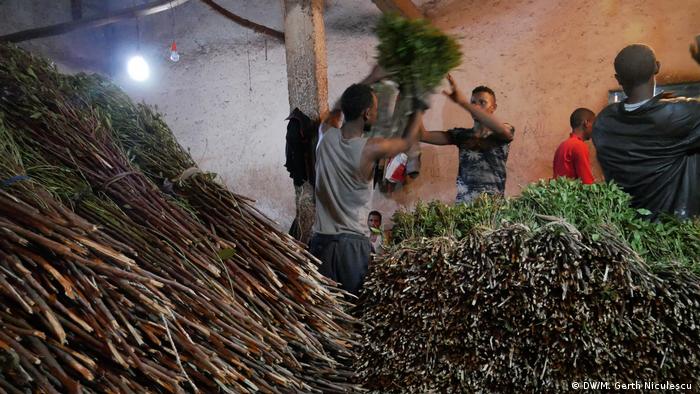 Chala Jemal and his family are among the many households who have relied on khat for decades."Khat produces lots of income per kilo. You reap it three times a year, sometimes even four or five times. Other crops are harvested only once," Chala said, proudly showing off his father's farm. The family owns about five hectares (12 acres) of khat land, passed down through several generations. The cold harvest nights are part of Chala's most cherished childhood memories. His favorite time of the year is the rainy season, from June to September. "During the rainy season, khat will be surrounded by different plants, so I have to clear the ground to give it more life. It's green everywhere and the plants need my support," he said.

One kilogram of export khat can be sold for around €20, but prices can go up significantly according to the quality of the produce. "We use the income from khat to build up our capital, to buy a car or run different businesses. In parallel, we grow maize, sorghum, peanuts, for everyday sustenance," explained Chala, squatting next to a young khat tree. He passed his fingers gently through the reddish leaves at the top of the branches. "These will give you merqana," an expression which describes the high one gets from chewing khat. Chala talks about it with delight. "Merqana will keep your stress away. If you are tired, weak, it will take it away, make you forget everything and make you feel who you are," he added. Others say merqana is the depressive moment which comes right after the euphoria.

Tanzania fights illicit drugs, but at what expense?

Tanzania continues to fight against illicit drugs. A recently-released list of "drug pushers," including the names of politicians and artistes, has raised questions about the role of the government in such a crackdown. (20.02.2017)

They can cause death, have unknown side-effects, fail to treat illnesses and sometimes even add to the spread of disease. Now, the battle to eliminate fake pharmaceutical products is being stepped up. (10.01.2018)

An exhibition in Berlin has drawn both praise and condemnation for presenting the lives and migration routes of the city's African drug dealers. The artist behind it believes the dealers do brave political work. (06.12.2017)