French authorities have released a Saudi man they detained after mistaking him for someone else who is wanted over his involvement in the brutal murder of Jamal Khashoggi in 2018. 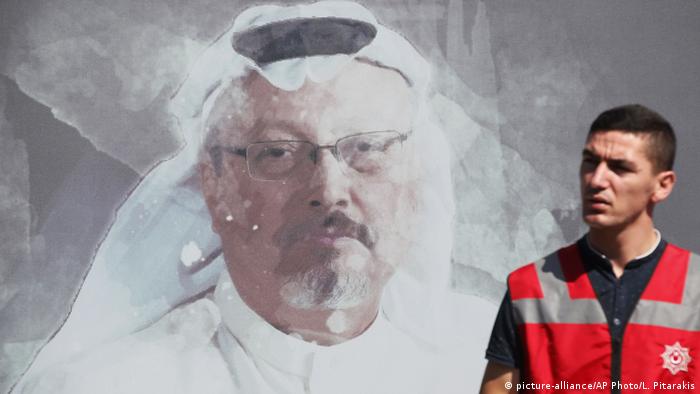 In this October 2019 photo, a Turkish police officer stands in front of a picture of murdered Saudi journalist Jamal Khashoggi, who was killed in Istanbul in 2018

France released a Saudi man on Wednesday after confusing him with someone else suspected of being linked to the killing of journalist Jamal Khashoggi.

The move comes after Saudi officials said the man, who was arrested at an airport in Paris on Tuesday, "has nothing to do with the case in question."

After reviewing the man's identity for around 24 hours, French prosecutors made the decision to release him — saying it was a case of mistaken identity.

"In-depth verifications to determine the identity of this person have enabled us to establish that the [arrest] warrant was not applicable to him," the Paris General Prosecutor's office said in a brief statement.

"He has been released," prosecutors added.

They did not immediately provide further details.

Earlier, French media reported that the confusion was related to the fact that the man detained by French authorities had an identical name to another person wanted in the Khashoggi murder case.

How did Saudi Arabia react?

Saudi Arabia's embassy in Paris criticized the arrest and had demanded his release on Tuesday night.

In a statement, they'd said the man who was arrested "has nothing to do with the case in question."

Saudi Arabia has repeatedly maintained that its investigations into Khashoggi's killing are complete and that there is no need for additional arrests.

In 2020, a Turkish court launched proceedings against 20 Saudi nationals suspected of involvement in the assassination in absentia.  No one has faced trial in person in Turkey as yet.

What happened to Khashoggi?

Jamal Khashoggi was a prominent journalist and blogger who was known for his criticism of the Saudi royal family. He lived in self-exile and wrote for the US newspaper, The Washington Post.

Khashoggi was killed in the Saudi consulate in Istanbul in Turkey on October 2, 2018.

US and Turkish officials said a Saudi hit squad strangled him and dismembered his body.