The Mideast peace process has reached a 'critical stage,' according to US Secretary of State John Kerry. He has called on the Israelis and Palestinians to demonstrate leadership and salvage their faltering negotiations. 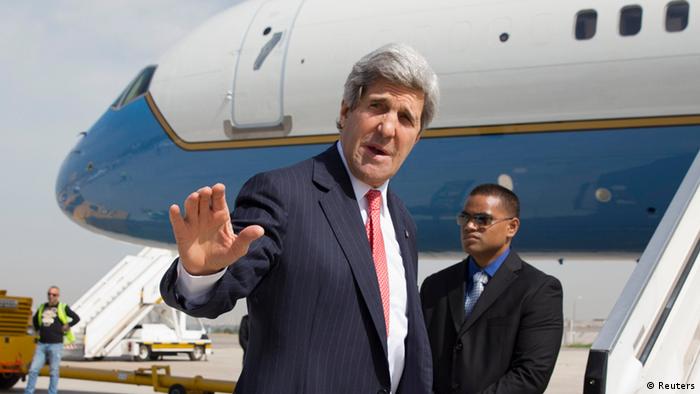 Secretary Kerry on Thursday said that only the Israelis and Palestinians can reconcile the gap in their positions, adding that success or failure ultimately depends on their willingness to find a compromise.

"You can facilitate, you can push, you can nudge, but the parties themselves have to make fundamental decisions to compromise," Kerry said in Algiers. "The leaders have to lead, and they have to see the moment when it's there," he added.

The secretary of state is currently on a tour of North Africa, where he's focusing on strengthening regional security cooperation.

Kerry had originally set an April 29th deadline for the two sides to hammer out a final settlement. Having proven unable to reach a deal so far, they are now negotiating to extend the peace talks beyond the deadline.

On Wednesday, the Palestinian Authority applied for greater recognition at the UN, submitting applications to join 15 international conventions. The move came in response to Israel's failure to release a fourth batch of Palestinian prisoners last Saturday.

The Palestinians' UN envoy, Riyad Mansour, told a news conference on Wednesday that his government may apply to join additional conventions and organizations including the International Criminal Court (ICC) in The Hague.

"The leadership will observe and see how things unfold, and it will decide accordingly the timing of the second batch and the third batch and so on and so forth, on the basis of interests of the Palestinian people," Mansour said.

When the peace talks began last July, Israel agreed to release 100 Palestinian prisoners, while the Palestinians agreed to forgo any unilateral moves for greater international recognition. In 2012, the Palestinian Authority had won observer status at the UN, angering the US and Israel.

Meanwhile, Israel has continued to build new settlements in East Jerusalem and the West Bank.

White House spokesman Josh Earnest on Wednesday condemned what he called the "unhelpful, unilateral actions that both parties have taken in recent days."