Kenya's president has declared corruption a national security threat. But his anti-graft offensive has been met with ridicule online. Many say it's too little, too late. Some think it's connected to the Pope's visit. 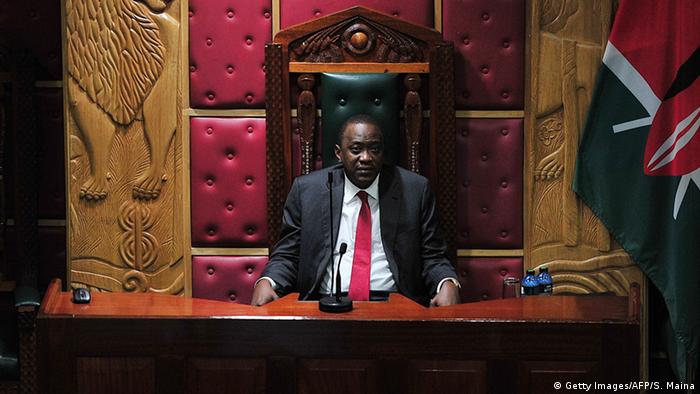 Kenya's president Uhuru Kenyatta woke up to widespread scorn on Tuesday, a day after declaring corruption a national security threat.

"The bribe accepted by an official can lead to successful terrorist attacks that kill Kenyans," the head of state announced Monday in his annual #link:http://www.president.go.ke/2015/11/23/statement-by-his-excellency-hon-uhuru-kenyatta-c-g-h-president-and-commander-in-chief-of-the-defence-forces-of-the-republic-of-kenya-on-a-national-call-to-action-against-corruption-state-house/:final State of the Nation speech#. "It can let a criminal off the hook for them to return to crime and harming Kenyans...The damage to our economy puts millions of lives at peril and undermines our very aspirations as a nation. I am therefore declaring with immediate effect corruption as a national security threat."

Staring down rows of high-ranking government officials, Kenya's controversial president laid out a series of measures meant to rid East Africa's largest economy of the graft that has spread during the first two years of his five-year term.

The proposed legislative crackdown seeks to punish any business or state employee violating a new Code of Ethics. State employees must fear being added to #link:http://nairobiwire.com/2015/03/full-list-of-corrupt-officials-in-uhurus-list-of-shame.html:Kenyatta's long "List of Shame"# and face prosecution, while companies breaching the code risk being blacklisted for "not less than 5 years," the president warned. Kenyatta added that banks violating anti-money-laundering regulation will lose their licenses.

Some Kenyans were quick to echo their leader's proclamation that his ambitious anti-corruption action plan marked "a new beginning."

But their optimism was soon drowned out by critics, who were quick to voice their skepticism that this was more than tough talk, using the hashtag #StateOfTheNation to hijack the conversation on social media.

Meanwhile, others described the speech as farcical:

The online lashing comes after Kenya's auditor general, Edward Ouko, this summer released a scathing report on the government's finances.

The report found that around a quarter of the state's $16-billion (15-billion-euro) budget for 2013-2014 could not be properly accounted for. Nearly a fifth of financial statements from government ministries were "misleading," and some $600 million could not be accounted for at all.

The audit fueled accusations that corruption has run amok under Kenyatta's watch. John Githongo, whose tweet was seen above, at the time called it proof that "this is the most rapacious administration that we have ever had."

Earlier this month, nearly a dozen ambassadors, including from the US and Britain, went a step further, saying Kenya faced a "corruption crisis" and vowing to step up efforts to stem the flow of illicit funds out of the country.

In the wake of these damning developments, contempt for the Kenyan leadership resurfaced following Tuesday's speech, with influential online activist Boniface Mwangi holding Kenyatta directly accountable for the malaise:

Meanwhile, thousands of Kenyans used the hashtag #JubileeAntiCorruptionJokes - referring to the ruling Jubilee Alliance Party - to show what they think of the President's pledge to combat graft:

Violah Ng'etich, who posted that last tweet, was far from the only user who joked that Kenyatta's action was little more than political theater ahead of Pope Francis' visit this week. When the president announced a cabinet reshuffle on Tuesday to weed out corrupt officials, reactions were similarly cynical:

However, many say the root cause of the country's corruption problem goes deeper than mere greed. The real issue, they argue, is Kenya's festering tribalism, with more than 40 tribe dividing a population of some 45 million and fighting for political and economic dominance. Many used the hashtag #CorruptionTurningPoint to voice their concerns.

In a further sign of just how pressing the problem has become for political stability in the East African nation, dozens of athletes stormed the Athletes' Association of Kenya in Nairobi, the country's athletics governing body headquarters, on Monday morning.

The sit-in, which continued well into Tuesday, came after media reports that top athletics officials had accepted bribes of close to $700,000 from sportswear giant Nike. It also comes at a time when the sport has been swept up in a wider doping scandal, tainting Kenya's reputation as the home of some of the world's finest middle and long-distance runners.

Popular Kenyan sports reporter Saddique Shaban said as many as 60 athletes, including former Boston Marathon champion Elijah Lag, took part in the two-day siege, wielding placards reading "Time for the corrupt to go home" and "We must have a new constitution."

After 36 hours, the athletes ended their siege following negations with the Kenyan Sports Ministry.

The agreement calls for the corrupt officials to step down as well as an amendment to the Athletics Kenya constitution to give athletes a greater voice.

Hundreds of other corruption critics are hoping for similar success as they march to the presidential resident, the State House, in the nation's capital on December 1. The protest will mark the culmination of an #link:https://secure.avaaz.org/en/petition/THE_PRESIDENT_OF_KENYA_DECLARE_CORRUPTION_A_NATIONAL_DISASTER/?nDVHTjb:online petition# launched by activist group #TeamCourage, calling for President Kenyatta to "declare corruption a national disaster. Using the hashtag #CorruptionANationalDisaster, they've already mobilized more than 1,300 supporters.

The activists, who posted a defiant letter entitled "Kenya the Mafia Country" to one of the organizer's Facebook page, wrote that "a declaration will not be enough without actions to match it. We will ask the president to take the following [eight] steps to rid his government of corruption and save this country from self destruction."

"By declaring corruption a national disaster the government will ensure that sufficient resources are allocated to effectively fight this vice," the group argues.

If the athletes' uprising is any lesson, Kenyatta would be well-advised to do more than talk the talk, but also walk the walk - and not just while the Pope is visiting.

Four candidates are vying to succeed President Uhuru Kenyatta in Kenya's 2022 election. A guide to who they are and what they promise voters.