Kenyan police have issued a $100,000 bounty for the capture of a German man accused of fighting with al-Shabab in an attack on a military base. Two Kenyan soldiers and 11 al-Shabab militants were killed in the attack. 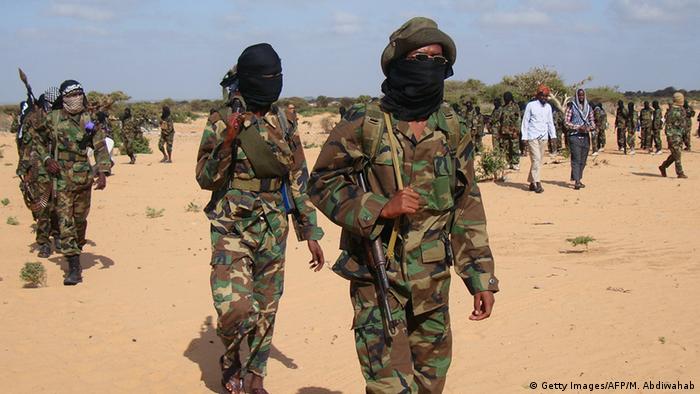 Convert Andreas M. from Bonn, who uses the alias Abu Nusaybah, is alleged to have taken part in the attack in Lamu county in Kenya on Sunday, which left two Kenyan soldiers and 11 al-Shabab fighters dead.

Andreas M., 42, was injured during Sunday's attack and is now on the run, according to information from security forces.

Attacks by al-Shabab in Kenya rise

Sunday's attack is part of a growing number of assaults in Kenya carried out by the Somalia-based Islamist al-Shabab group.

Another foreigner, 25-year-old Thomas Evans from the UK, also took part in Sunday's assault and was killed in the fighting. Evans traveled to Somalia to join the militant group in 2012.

The reward for the capture of Andreas M. is part of a police campaign known in Kiswahili as Kaa Chonjo Usinyamaze ("Be alert, Don't Keep Quiet"), which was launched to tackle the threat from the jihadists.

Andreas M. disappeared in Kenya in 2011, before announcing that he had joined al-Shabab in the spring of 2012. He is initially thought to have got in contact with the group via Bonn's Islamic scene, and then traveled to Pakistan before being arrested by country's secret service.

He spent nine months in a local jail, but said afterwards that prison had only cemented his beliefs.

Andreas. M's Eritrean wife and their daughter also traveled with him in 2011 to Somalia. The mother and daughter are thought to be staying in an area of Somalia still controlled by al-Shabab.

Editor’s note: Deutsche Welle is bound by German law and the German press code, which stresses the importance of protecting the privacy of suspected criminals or victims and obliges us to refrain from revealing full names in such cases.