Kanhaiya Kumar on his arrest and sedition in India

Shortly after his release on bail from prison, Indian student leader Kanhaiya Kumar speaks to DW about the government's use of a controversial sedition law as well as why he's fighting for change. 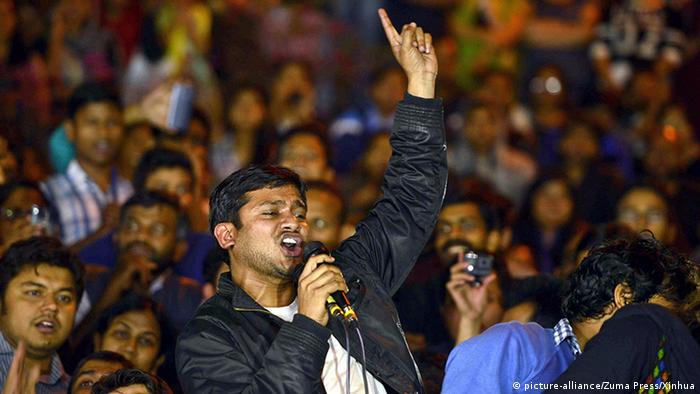 28-year-old Kumar was arrested on sedition charges on February 12 following a rally at the Jawaharlal Nehru University (JNU) in the capital, New Delhi, at which anti-India slogans were allegedly chanted.

The arrest sparked protests and counter-protests, pitting proponents of free speech against the nationalist government of Prime Minister Narendra Modi and its supporters.

It triggered a nationwide debate over freedom of expression, bringing thousands of students, teachers and activists onto the streets.

Kumar was later released from jail on March 3, after the Delhi High Court had granted him interim bail for six months while the police continue to investigate the case.

Following his release, Kumar returned to the JNU campus and gave a rousing speech in front of hundreds of students and faculty members criticizing the Modi administration. DW talks to the student leader about his arrest and his criticism of the government. 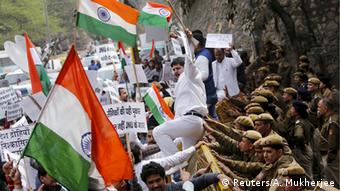 DW: Following your release, you continued to criticize the Modi government as authoritarian. What do you intend to achieve?

How did the time you served in prison affect your outlook and future plans?

I kept my hopes alive and was not scared. I am not becoming a leader and am just raising the issues that are there in society. Ours is not negative politics intended to tarnish the country's image.

The Bharatiya Janata Party (BJP) is manipulating the issue of nationalism but that cannot break our spirit. I realized one thing in jail: As students of JNU, we speak in civilized voices, but maybe it doesn't reach the common man. We have to establish communication with the common people.

Umar Khalid and Anirban Bhattacharya, students of New Delhi's JNU, were taken into police custody. The two were arrested for sedition following allegedly anti-national protests over a week ago. (24.02.2016)

India’s biggest student protests in 25 years have spread to 18 campuses. Hindu nationalists are calling everyone else traitors, and this may just be the beginning of bad days to come, writes Shivam Vij. (16.02.2016)

Protests paralyze India's JNU as government cracks down on dissent

Thousands have protested at one of India's top universities after its student union president, Kanhaiya Kumar, was arrested for anti-India slogans. Kumar questioned the execution of a Kashmiri separatist in 2013. (15.02.2016)

I am a resident of this country, not a terrorist. Sedition should not be used against students ... we understand the limits of freedom of speech as a right.

Afzal Guru was an Indian and a resident of Jammu and Kashmir. Whatever happened to him was in accordance with the Indian law. So I don't like to comment on that. All I want to stress is that Afzal Guru is not my icon, but rather it is Rohith Vemula, the student leader from Hyderabad who committed suicide in February.

Do you see yourself entering the political arena and contesting elections?

Politics will be a part of my life but I have no intention of joining mainstream politics or contesting any election. Now, as a student, I want to ask questions and, in future, I want to answer questions as a teacher. So the question about my political ambitions should be kept aside.

How do you describe your differences with the government?

If you speak against the government, their (government's) cyber cell will frame you using doctored videos. But the constitution cannot be doctored. The Prime Minister tweeted, Satyamev Jayate (truth will prevail). My reply is this: Honorable prime minister, I have serious ideological differences with you but Satyamev Jayate is not your slogan; it is the motto of the country and the constitution, so I too will happily say Satyamev Jayate.

How long are you planning to continue your struggle?

This is a long struggle and we have to carry it forward without stopping, without bending, without pausing for breath. We will stand united against divisive forces like the ABVP, the ruling BJP's student wing, within the JNU campus and the BJP and Hindu extremist groups outside the campus who are trying to bring the country to the edge of destruction.