Kabul: There is no guarantee of security

After the terrorist attack that killed an Afghan security guard and a German aid worker, DW's Sandra Petersmann and Birgitta Schülke-Gill spoke to people about living in Kabul. They portray a life of fear and anxiety. 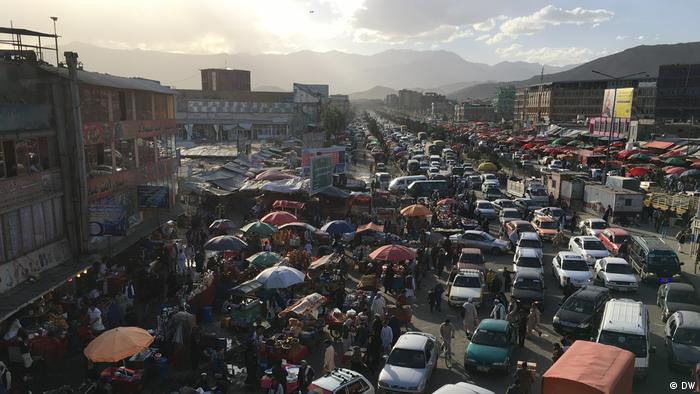 Fragile peace in Kabul: rush hour at a bazaar

We're going about our work, listening and reading deportation notices. Amir, Nuri, Mujtaba and Isa are telling us how scared they are of life in Kabul. We're in the Afghan capital, sitting with asylum seekers who've been sent back from Germany, when the terrible news of the attack on a Swedish aid organization, Operation Mercy, reaches us.

We are shocked and appalled. All attacks are horrendous. Kabul. Paris. Brussels. Nice. Berlin. Details are still unclear. We call contacts in Kabul to find out more. We follow what Afghan colleagues are reporting on social media.

We let our families know that we're okay. Friends and colleagues call, text or send messages on WhatsApp. The young deportees understand German well enough to follow our conversations with people back home. Mujtaba and Isa offer us their condolences. We speak to the editor-in-chief and the security coordinator and weigh up the situation.

The picture starts to become clearer. The attack on Saturday evening was aimed at foreigners. The target was the aid organization's living complex. An Afghan security guard and a German aid worker are dead. A Finnish aid worker has been abducted.

It's not the first targeted attack on foreigners in Kabul. Usually, though, the victims are Afghan civilians. Since the start of this year there have been at least seven serious attacks in Kabul, in which several hundred people were killed or injured. Responsibility was claimed either by the Taliban or by the so-called "Islamic State."

The Afghan capital has been quiet recently. When we touched down a couple of days ago, the fortress of Kabul, with its high blast protection walls and barbed wire barriers, seemed peaceable enough. The sun shone brightly in a steely blue sky. The people we've been speaking to are open and friendly. But this latest attack is not the only indication that this calm is deceptive.

There is no guarantee of security in Kabul. A place that's safe today can be the site of an attack tomorrow. Before our departure we imposed security rules on ourselves. Our employer has very clear rules for postings to crisis regions, and we stick to them. We listen to what our instincts tell us. We can't do any more than that.

We ask everyone we speak to what they think of the fact that the United States and its NATO partners want to send more soldiers to Afghanistan again.

"What good will that do if nothing else changes?" "The most important thing is that we Afghans should stand together and our government should finally govern, instead of arguing." "What good will more foreign soldiers do if they're not allowed to fight?" "We have to disarm all the militias and support only our security forces." "NATO has failed. They should send us UN troops." "What we would like from the international community is security first, then education."

The answers differ, but none of the citizens we spoke to – male or female – felt safe in Kabul. They all live with the risk, though, because life has to go on. We often hear people say, "When we leave the house in the morning, we don't know whether we'll come back alive in the evening, but we can't just stop living."

As foreign guests in this city, we are in no greater danger today, after this latest, murderous attack, than we were yesterday. Terrorism and violence are part of everyday life in the Afghan capital. Added to that is gang-related crime. Kidnappings are a business model in Kabul.

We are here as journalists, to portray daily life in the Afghan capital. We are familiar with Kabul and Afghanistan from many visits. Afghanistan is a country at war. The international military deployment, now in its 16th year, has brought the country progress and has opened it up. It has not, however, brought peace or security.

Pakistan's military claims it has killed more than 50 Afghan troops along the border. While border clashes between the two countries are not a new occurrence, experts say this time the situation is more "warlike." (07.05.2017)