Juneteenth: US gets new federal holiday to celebrate end of slavery

The holiday, which will take place annually on June 19, has been signed into law in order to remember the emancipation of enslaved Black Americans. 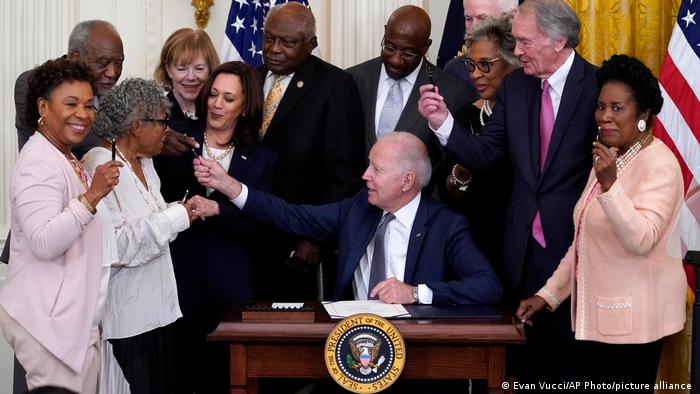 US President Joe Biden has signed Juneteenth into law, amid celebratory scenes at the White House

US President Joe Biden signed a bill into law on Thursday, that makes June 19 a federal holiday — known as Juneteenth — as a way of commemorating the emancipation of enslaved Black Americans.

Juneteenth has long been a regional holiday in the South but was given added impetus to become an official nationwide holiday after the protests in 2020 over police killings of George Floyd, Breonna Taylor, Rayshard Brooks and other African Americans.

Amid jubilant scenes at the White House, Biden agreed that more than just a commemoration of the events of June 19, 1865, was required.

"This day doesn't just celebrate the past. It calls for action today,'' the president said before he established Juneteenth National Independence Day.

His audience included some members of Congress and Opal Lee, a 94-year-old Texas woman who campaigned for the holiday. 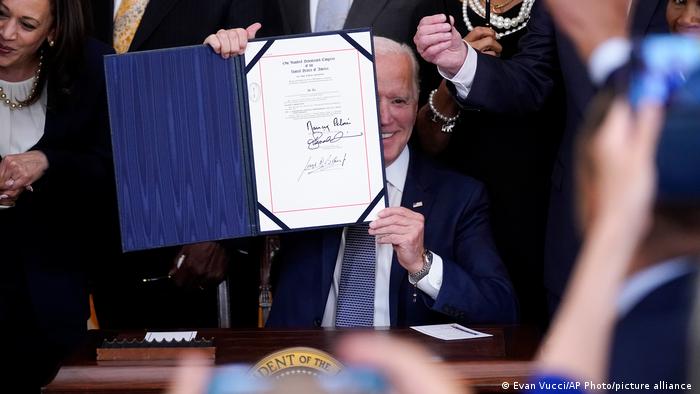 Juneteenth is a blend of the words June and 19th and is also known as Emancipation Day.

It commemorates the day in 1865, after the Confederate states surrendered to end the Civil War, when a Union general arrived in Texas to inform a group of enslaved African Americans of their freedom under President Abraham Lincoln's 1863 Emancipation Proclamation.

Where has it been celebrated?

Juneteenth began in Texas exactly one year later. And in 1980, the state officially declared it a holiday.

By 2020, it was recognized in 46 other states as well as the District of Columbia.

Rules regarding holidays and days of observance vary from state to state, according to the National Juneteenth Observance Foundation, which campaigned for Juneteenth to become a federal holiday status.

So is it a big party?

Although in part a celebration, the day is also observed solemnly to honor those who suffered during slavery across the US, with the arrival of the first captive Africans over four centuries ago.

What role does the corporate world have in fighting racism?

Protesters have pulled down a statue of a Confederate general in the US capital following nationwide rallies marking the end of slavery . The toppling comes just ahead of a controversial rally by President Donald Trump.