Is art purely decorative or should it actively question and rebel against social norms? An event commemorating German artist Joseph Beuys ponders these questions. 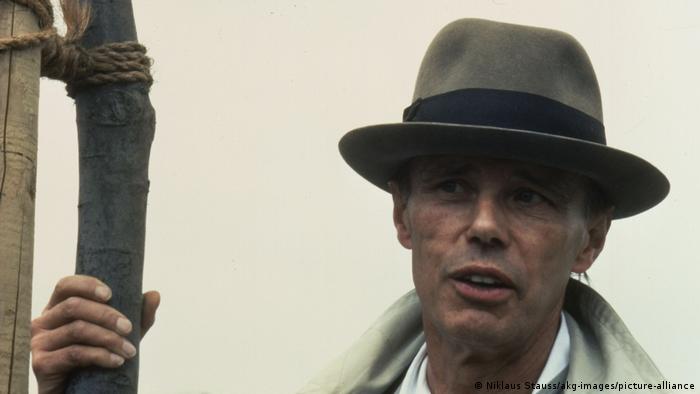 The felt hat and fishing vest were his trademarks; felt and grease, his favorite materials. He wanted to abolish capitalism and heal the world with art: This is how Joseph Beuys became Germany's best-known and most influential artist of the 20th century.

Beuys caused a stir in the art world for much of the past century, where to this day, he has his ardent admirers as well as those who think rather little of him.

Twelve museums along the Rhineland, all the way from the Bundeskunsthalle museum in Bonn to the Kulturhaus gallery in Kleve, which is where the sculptor, philosopher, art teacher and installation artist was born on May 12, 1921, are participating in this year's anniversary program, marking the 100th birthday of one of the biggest names in art to ever have come out of Germany.

One museum has already launched its anniversary program, titled after Beuys' famous guiding principle, "Everyone is an artist." The K20 museum, which is part of the Kunstsammlung NRW museums in Düsseldorf, has started showing 12 selected artworks and so-called "happenings" — performances by Beuys that were captured on film by his contemporaries roughly half a century ago. 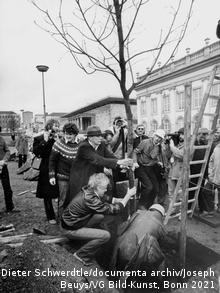 Planting trees as an art performance: In 1982, Joseph Beuys combined his creativity with his environmental concerns

These images can be seen flickering across screens and canvases at the K20 as of March 27, 2021, and are accompanied by a myriad of pictures, words, sculptures and the bright lights of projectors filling the space and structured by a framework of steel rods.

The exhibition includes the 1974 installation "I like America and America likes Me" — a controversial work of action art in which Beuys was locked up in a New York gallery for two days alongside a live coyote. This performance not only earned him the reputation of being somewhat of a shaman but also caused a steep hike in the prices his works would fetch in the global art market at the time.

There are also photographs documenting Beuys' planting of "7000 Oaks" at the 1982 documenta7 exhibition in Kassel, which the artist used to propagate his need for "Stadtverwaldung statt Stadtverwaltung," a play of words in German amounting to "urban forestation instead of urban administration."

But what message does Beuys have today that would resonate with younger generations who were born after his death in 1986?

In order to explore this question, the curatorial team of Isabella Malz, Catherine Nichols and Eugen Blume added 34 works and ideas by contemporary artists, authors, thinkers and activists to the Beuys retrospective. Though these may not refer directly to Beuys and his art, they help the audience enter into a dialogue with the artist — and with each other.

For the audience's search for answers to the pressing questions of our time is not only reflected in Beuys' work: for example, there are quotes by climate activist Greta Thunberg, an interview with controversial philosopher Michele Houllebecq and insights from US civil rights activist Angela Davis, Indian ecofeminist activist Vandana Shiva, and Vietnamese Buddhist monk Thich Nhat Hanh. 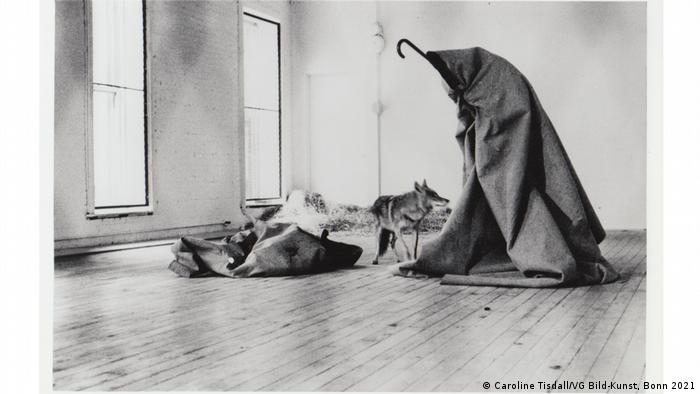 A different 'Coyote Ugly': Beuys spent two days locked up with a coyote as an action artworks

These voices are juxtaposed with Beuys' quotes, which are stuck all over the walls, creating a polyphony of sounds, words and impressions — something that the artist would probably have enjoyed himself. The exhibition almost becomes a work of action art in its own right.

However, this perhaps is also the weakness of the show in Düsseldorf: It reduces the artist to his action art, while his drawings, sculptures and mixed material creations are omitted entirely. The show is, therefore, rather less of a typical exhibition than a racecourse through Beuys' history as an artist against today's backdrop.

Expanding the meaning of art

Then again, this approach is quite in keeping with Beuys' understanding of the concept of art. With his works, his actions and his statements, Joseph Beuys always posed questions that went beyond art and creativity, using art to start debates on the fundamental structures of society and bringing his audiences into communion with each other.

His artworks challenge established ideas: What is democracy? Has capitalism come to an end? What purpose does art serve in society? For Beuys, art did not mean individual works that one could hang up at home or in a museum but included events, conversations and thought processes.

After all, the famous Beuys quote "Every person is an artist" means that every person is a social being who has the creative power to change themselves and the world. The Beuys exhibition in Düsseldorf can be seen until August 15, 2021

While Beuys' works may reflect many questions about society, they provide little information about the artist himself. For example, Beuys would routinely make up details about his own biography to stir up the bureaucracy that is part and parcel of the global art market. This eventually led to his dismissal as an art professor at the Düsseldorf Art Academy.

Still, this is seen as an outstanding example of his talent for self-promotion, but it is unclear where the self-promotion ended and Beuys' authentic self began: For example, Beuys was a co-founder of Germany's Green Party, while hanging out in neo-Nazi circles. He promoted the cause of environmentalism while driving a big Bentley. He was staunchly against capitalism while rubbing shoulders with bankers with sketchy pasts.

Was Joseph Beuys a visionary, as his ardent admirers believe — or a charlatan hiding under a hat, as his critics say?

The Düsseldorf exhibition does not address such questions. It rather confirms the fact that Joseph Beuys was a complex artist in post-war Germany. As the Beuys anniversary year has only just begun, there might be answers to questions relating to his person elsewhere in the many events and venues highlighting and celebrating the artist's life.

Germany has returned another work to the heirs of its Jewish owner. So far, only 14 works were proven to have been looted under the Nazis among the some 1,500 found in Gurlitt's hoard.