King Abdullah and the prince visited their grandfather's grave, according to state TV. The visit is a show of unity after Hamzah was implicated in a "plot" to destabilize Jordan. 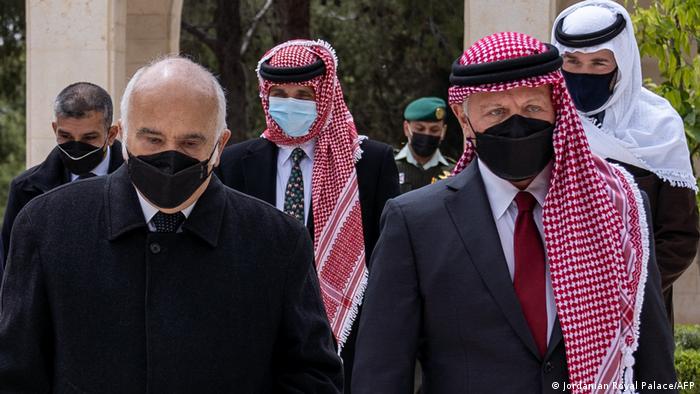 Jordan's King Abdullah II appeared on Sunday alongside his half-brother, former Crown Prince Hamzah, for the first time since a royal crisis that rocked the kingdom, state television showed.

The king, prince and other members of the royal family visited the grave of the late King Talal, their grandfather, the Royal Hashemite Court said on Twitter.

All members of the family appeared to recite the Quran. While most were dressed in civilian clothes, the king's son and heir to the throne Prince Hussein wore a military uniform.

The public show of unity comes as Jordan tries to move past the crisis within the palace.

What was the royal rift?

The Jordanian government had accused Hamzah of involvement in a plot to "destabilize the kingdom's security," with at least 16 people having been arrested.

Hamzah had criticized the government and said he was under house arrest in a video published a day before the government made the accusations public.

In a leaked audio recording, he said he had been threatened by security services but refused to adhere to "unacceptable" orders to cut off from public communication.

In recent days, the palace has attempted to signal that the situation is under control.

What is the aftermath of the row?

On Monday, the royal court announced that Prince Hamzah had signed a letter pledging unfailing support to the king.

A day later, King Abdullah said Hamzah was at the royal palace and under "care," adding that the "sedition came from within and without our one house."

The United States and other allies voiced support for the king, who had maintained Jordan's reputation as a stable country in the conflict-torn region until the rift with his half-brother.

Hamzah is a popular figure among broad swats of society in Jordan. He had been widely expected to succeed Abdullah as the next monarch, but the king stripped him of the crown prince title in 2004 to give it to Prince Hussein.

Jordan's Prince Hamzah claims to be 'under house arrest'