The royal palace says Prince Hamzah has signed a letter of allegiance to King Abdullah. Hamzah was accused of aiding a plot to "destabilize the kingdom's security." 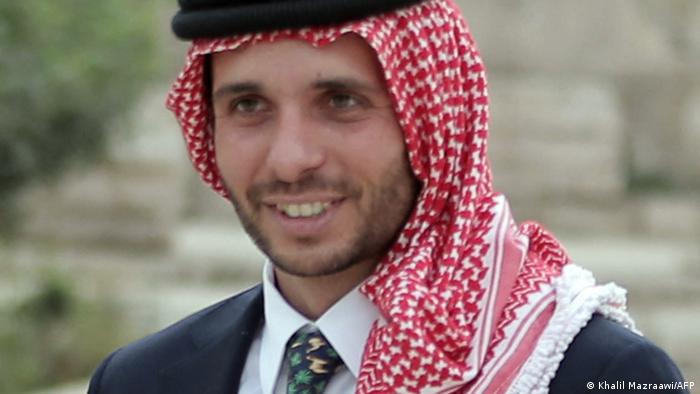 Prince Hamzah has denied being involved in any "nefarious" plot

Prince Hamzah has signed a letter in which he pledges unfailing support to the king, the royal court said on Monday, after the prince was accused of fomenting instability in Jordan.

"I place myself in the hands of His Majesty the King. ... I will remain committed to the constitution of the dear Hashemite Kingdom of Jordan, and I will always be of help and support to His Majesty the King and his Crown Prince," the letter, issued in a statement by the royal court, said.

"The interests of the homeland must remain above every consideration. We must all stand behind the king in his efforts to protect Jordan and its national interests," the letter went on. A lawyer for the outspoken prince also confirmed that the mediation had been successful.

Hamzah, the former crown prince, signed the letter after he met with Prince Hassan, the king's uncle, and other princes on Monday, the royal court said.

Jordan's royal palace had announced earlier on Monday that King Abdullah II would ask a family member to act as a go-between with his younger half-brother Hamzah, who had been accused of a "wicked" conspiracy against the monarch.

Abdullah has "decided to handle the question of Prince Hamzah within the framework of the Hashemite (ruling) family and entrusted it to (his uncle) Prince Hassan," it said in a statement.

A lawyer for the outspoken prince also confirmed that the mediation had been successful and that a
resolution of an unprecedented public feud is expected shortly.

Hamzah had originally insisted that he would not obey orders restricting his movement while under house arrest.

Hamzah, 41, said he had been threatened by the Jordanian security services but did not plan to adhere to "unacceptable" orders that he remain confined at home, cut off from public communication, according to a new voice recording released early Monday.

The government had accused Hamzah of being involved in a plot to "destabilize the kingdom's security," and placed him under arrest in his Amman palace, while detaining more than a dozen other officials.

Hamzah hit back, saying: "I don't want to make moves and escalate now, but of course I'm not going to obey when they say you can't go out, you can't tweet, you can't communicate with people, you're only allowed to see your family."

Foreign Minister Ayman Safadi said Sunday that the prince had recorded conversations and given them to foreign sources as he sought support elsewhere.

The US and Arab governments have been quick to side with King Abdullah II, reflecting the country's strategic importance.

Domestically, Prince Hamzah's unprecedented criticism of the ruling class — without naming the king — could lend support to growing complaints about poor governance and human rights abuses in Jordan.

Abdullah and Hamzah are both sons of the late King Hussein, who remains a beloved figure more than two decades after his death. Upon ascending to the throne in 1999, Abdullah named Hamzah as crown prince, only to revoke the title five years later.

While the pair are said to have generally good relations, Hamzah has at times spoken out against government policies, and more recently had forged ties with powerful tribal leaders in a move seen as a threat to the king.

King Hussein's widow, Queen Noor, has posted a defense of her son, Hamzah, on Twitter saying: "Praying that truth and justice will prevail for all the innocent victims of this wicked slander."

Jordan's Prince Hamzah announced on Twitter that he no longer wants his royal title. He was previously accused of a plot to "destabilize the kingdom's security."