DiMeo is the world's first patient to successfully receive a face and double hand transplant. The psychological benefits far outweigh the risk of the procedure, doctors say. 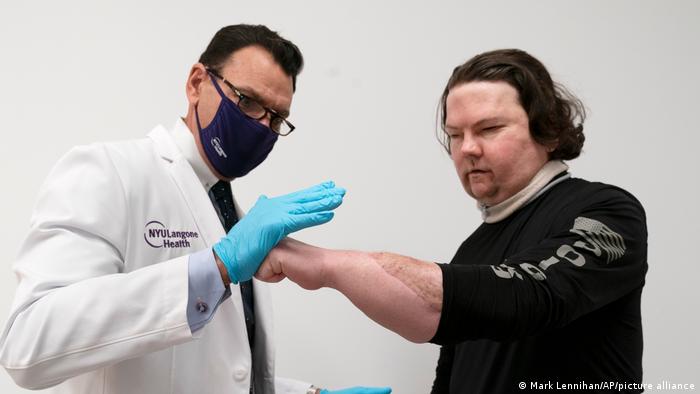 It was a short moment, but it changed young Joe DiMeo's life forever. In 2018, 20-year-old DiMeo fell asleep at the wheel after working a night shift. He car flipped over and burst into flames. Another driver on the road pulled DiMeo from the burning vehicle and saved his life, but the young man sustained burns to more than 80% of his body.

On Wednesday, doctors at New York University's Langone Medical Center revealed another major change in the now 22-year-old's life: He's the first person in the world to have received a successful face and double hand transplant. The NYU doctors had completed the unprecedented procedure in August 2020 but waited to share the results to make sure DiMeo's body didn't reject the transplants.

"We needed to avoid infection, we needed to have this operation occur as fast as possible, we had to be very selective with the donor, and we had to implement every state of the art technology that would ensure complete success of Joe's operation," Dr. Eduardo Rodriguez, head of the team that completed the surgery, told reporters on Wednesday. "And that's exactly what we did." 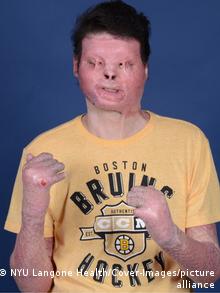 DiMeo before the transplant surgeries...

DiMeo lost his eyelids, ears and most of his fingers in the accident. He spent months in a medically induced coma, followed by 20 reconstructive surgeries and skin-grafts to treat his burns.

But it became clear that those surgeries wouldn't be enough for DiMeo to return to normalcy with full vision or use of his hands. His doctors began looking for a donor with the same gender, skin-tone and dominant hand as their patient but estimated there was only a 6% chance of finding someone to match DiMeo's immune system.

With all transplantations, there is always the risk of the body rejecting the transplant as foreign, which is why all patients receive immunosuppressive drugs. Finding a close-as-possible match lowers the risk of rejection. Even in a case like this, where no adverse immune reaction has taken place roughly half a year after the surgery, there are no guarantees. 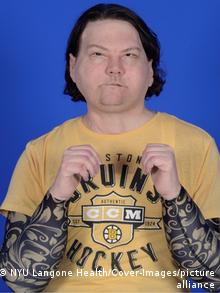 ... and after the procedure

"Initially, there can be problems with the wound not healing properly - the whole face could have gotten infected and then they would have had to take it off again," Dr. Robert Sucher, a surgeon specialized in visceral transplants and kidney, liver and pancreas transplants at Universitätsklinikum Leipzig, told DW.

"In the long run, there's the risk of immunological problems, of the body rejecting the transplanted organ," Sucher added. "That risk is smaller now after so many months, but it remains for the rest of the patient's life."

'A second chance at life'

In Wednesday's news conference, DiMeo could be seen pulling a small notecard from his pocket and reading from it. Other media reports show him playing with his dog and lifting weights at the gym. Getting to this point was not an easy journey.

"I knew it would be baby steps all the way," DiMeo told The Associated Press. "You’ve got to have a lot of motivation, a lot of patience. And you’ve got to stay strong through everything."

The transplant, he said to reporters on Wednesday, had given him 'a second chance at life."

There's a reason DiMeo's was the world's first successful face and double hand transplant - it's a highly complex procedure consisting of several surgeries that has only been attempted twice before.

A lot of different things have to be taken into consideration, explains Sucher, who has participated in hand transplant surgeries in Austria and the US. In the early 2000s, he was present for one of the world's first double hand transplant procedures in Innsbruck, Austria. Organs like a kidney are easier to transplant, he says, because they involve fewer different kinds of tissues.

Rodriguez, the lead doctor on DiMeo's transplant team, also emphasized the complexity of the effort.

"We have to replace 21 tendons, three major nerves, five major vessels, two major bones," Rodriguez said - per hand. After DiMeo's face was removed, small plates were put on his chin to help attach his new face. Nerves and vasculature were spliced together, to ensure blood flow and bring feeling to the tissue.

Sucher said complex procedures like double hand or face transplants have their opponents. The immunosuppressants that patients need to take for the rest of their lives can come with significant side effects and high risks, and unlike a heart transplant, for example, face or hand transplants aren't life-saving, but rather quality-of-life-improving surgeries. 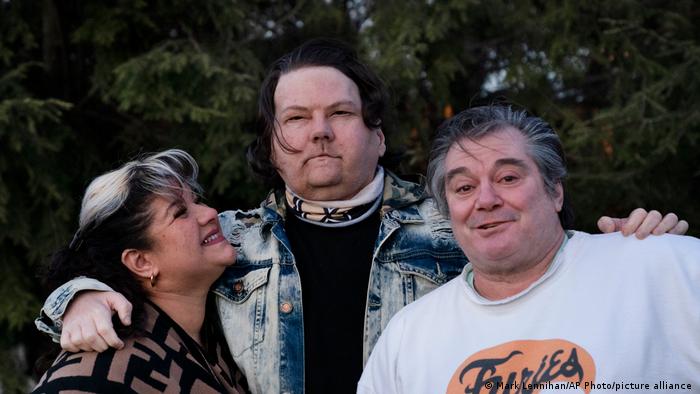 "There are alternatives like prosthetics" for patients who lost their hands, Sucher said. "Robo-hands, basically. But you can't feel with those. They'll always be foreign. And [double hand transplant] patients I've had in Innsbruck have told me 'It's such a special feeling to touch my wife again, to really feel another human being.'"

"A face is unique," the transplant specialist said. "With a face, you're recognized as a human, as a person. It's what you use to kiss someone. If you look at the before and after pictures [of DiMeo] - whom would you kiss? The man in the after picture."

We often don't like talking about our bowels, but they are of great importance for our overall health. And if they don't work properly, serious problems can occur. Sometimes stool transplants can help.

Surgeon Bruno Reichart has successfully implanted a pig's heart into a baboon. He tells DW why harvesting from other species could address a chronic shortage of human donor organs.