The Argentine-Israeli conductor Daniel Barenboim has been awarded Germany's Westphalia Peace Prize for his efforts to promote reconciliation in the Middle East with his Israeli-Arab West-Eastern Divan orchestra. 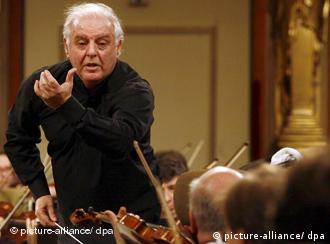 Barenboim says music can bring people in the Middle East together

The 67-year-old musician founded the West-Eastern Divan orchestra, made up of young Jewish and Arab musicians, in 1999. He shares the prize, worth 50,000 euros ($70,000) with the members of the orchestra.

At the ceremony in the western German town of Muenster on Saturday, Barenboim said the conflict between Israelis and Palestinians was no ordinary one. 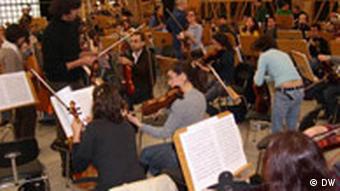 "It's not a military or a political conflict, but a human conflict, a conflict between two peoples," he said.

Building bridges and moving on

German Foreign Minister Guido Westerwelle on Saturday honored Barenboim as a "peace activist in the best sense of the word."

"Often, it's ordinary people like Barenboim, whose activism builds bridges and sets the foundations for peace," he said.

Barenboim is also known in Germany for promoting German composer Richard Wagner's work, saying Wagner’s work had nothing to do with the Holocaust.

Two weeks ago, at a symposium held by the Berlin State Opera ahead of the premiere of German composer Richard Wagner's work, "Das Rheingold", which Barenboim will conduct, the musician said it was time to move on from the long-standing taboo of boycotting Wagner's work in countries like Israel. Westerwelle honored Barenboim as an "activist in the best sense"

"I do not believe that one can connect Wagner with the Final Solution," he said. Wagner, who created the opera cycle "The Ring of the Niebelungen" and other central works of the German canon, has long been stigmatized because of anti-Semitic attitudes, and the fact that he was Hitler's favorite composer.

Barenboim was born in Buenos Aires, Argentina, on November 15, 1942 to Russian-born Jewish parents. He and his family moved to Israel in 1952.

The Westphalia Peace Prize was last awarded in 2008 to former UN Secretary General Kofi Annan, and in earlier years to conductor Kurt Masur. The prize is named after the Peace of Westphalia Treaty from 1648, which ended the Thirty Years' War in the Holy Roman Empire.