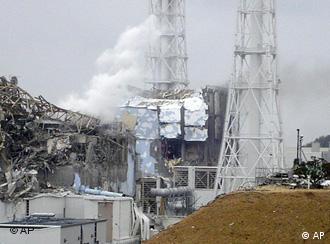 Fires were reported at the Number 4 reactor

Concerns persisted that the storage pools for spent fuel rods might be over-heating. The rods are immersed in cooling water for many years until they shed enough heat to become manageable for longer-term storage.

Water in one of these pools was evaporating because of the rods' heat, and temperatures were slowly rising in two other pools because coolant pumps were knocked out by the March 11 tsunami.

Despite desperate efforts to replenish the pools, the tanks may run dry and leave the fuel rods exposed, said experts from France's Nuclear Safety Authority. If that happened, the rods could reach such a temperature that they would melt or catch fire.

US nuclear regulators weighed into the debate late Wednesday, insisting there was a good chance the pools had already run dry.

"There is no water in the spent fuel pool and we believe that radiation levels are extremely high, which could possibly impact the ability to take corrective measures," said Nuclear Regulatory Commission Chairman Gregory Jaczko. The US was sending its own team to monitor the situation on Thursday.

Radiation from this catastrophic event could reach lethal levels, making it impossible for personnel to get close to intervene.

The worst-hit pool, in the Number 4 reactor unit, now has no protection against radioactive release into the atmosphere, because the building housing was breached by explosion and fire. 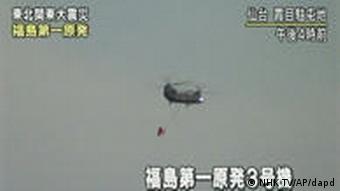 Concerns continued about the overheating reactors. Wednesday’s efforts to cool the reactors failed and radiation temporarily spiked to levels so dangerous that attempts to dump water from helicopters onto the reactors had to be abandoned. Those efforts have since resumed Thursday.

According to Japanese TV, police said they would attempt to cool the reactor using water cannon.

Only around 50 technicians were still working on the site, risking their lives to contain damage in the facility's reactor cooling functions sustained following Friday's 9.0-magnitude earthquake and tsunami, .

A spokesperson for the plant said they planned to concentrate on restoring the power supply to reactivate the cooling system on Thursday.

On Wednesday, both reactor number 3 and 4 caught fire. Government spokesman Yukio Edano said radioactive steam may have leaked from the shell of the Number 3 reactor after radiation levels at the plant reached record levels.

In a rare television address, Japanese Emperor Akihito said he was deeply worried by the nuclear crisis. 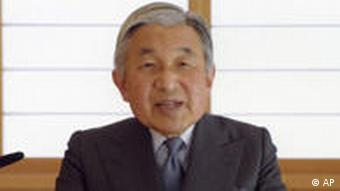 "I hope from the bottom of my heart that the people will, hand in hand, treat each other with compassion and overcome these difficulties," Akihito said, urging the survivors not to abandon hope.

The toll of the dead and missing from the quake and tsunami has topped 11,000 with over 3,500 confirmed dead and more than 7,500 still missing.

European countries have advised their citizens to leave Japan or travel to the south of the country. Paris has sent two planes to help evacuating French nationals.

Japan's government said it was considering asking the United States military for help in containing the nuclear crisis. 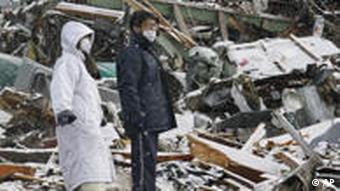 Quake victims search for their house amidst the debris

A handful of countries have imposed restrictions on flights to Tokyo. Several Asian and European airlines announced services to the capital would be frozen amid radiation fears.

On Tuesday, Japanese officials urged residents within 30 kilometers (19 miles) of the plant to leave the area or stay indoors, after harmful levels of radiation were detected following two explosions.

Powerful aftershocks continued to be felt in eastern parts of Japan on Wednesday. A 6.0-magnitude quake hit Tokyo, causing buildings to sway.

There are regular earthquakes and volcano eruptions throughout the entire Asia Pacific region. But the devastation in Japan has received less attention from the region than from Europe and the USA. (15.03.2011)

With its bungled information policy, Japan's is losing the trust it needs among the population, DW's Sybille Golte says. (16.03.2011)

Germany's Japanese community is anxious about relatives back home (15.03.2011)