The annual peace ceremony has been scaled back this year because of the coronavirus. In Prime Minister Shinzo Abe's presence, Hiroshima's mayor called on world leaders to commit more seriously to nuclear disarmament.

On Thursday, Japan marked 75 years since the world's first atomic bomb attack, which is estimated to have killed 140,000 peoplein the months following the explosion. Survivors, their relatives and a small number of foreign dignitaries commemorated the anniversary with prayers, songs and calls for world peace.

The ceremony at the Hiroshima Peace Memorial also offered a minute of silence at exactly 8:15 a.m. local time (2315 UTC Wednesday), the time the first nuclear weapon was detonated over the city.

"We must never allow this painful past to repeat itself," Hiroshima Mayor Kazumi Matsui said in an address. "Civil society must reject self-centered nationalism and unite against all threats."

The United States dropped the first atomic bomb on Hiroshima on August 6, 1945, destroying the city. By the end of 1945, about 140,000 people — mostly civilians, and around 40% of the city's population prior to the attack — had died either in the blast or as a result of aftereffects.

The US dropped a second bomb three days later on the southern city of Nagasaki, which is estimated to have claimed a further 74,000 lives in 1945 alone. Japan declared its surrender days later, on August 15, 1945.

Because of coronavirus concerns, fewer than 1,000 people, or about one-tenth the size of the typical crowds in recent years, attended the ceremony. Many dressed in black and wore face masks, and chairs were spaced far apart.

As the general public could not attend this year, the ceremony was broadcast online.  Many of the other traditional events that usually take place to mark the anniversary were canceled. Prime Minister Shinzo Abe attended, laying a wreath. 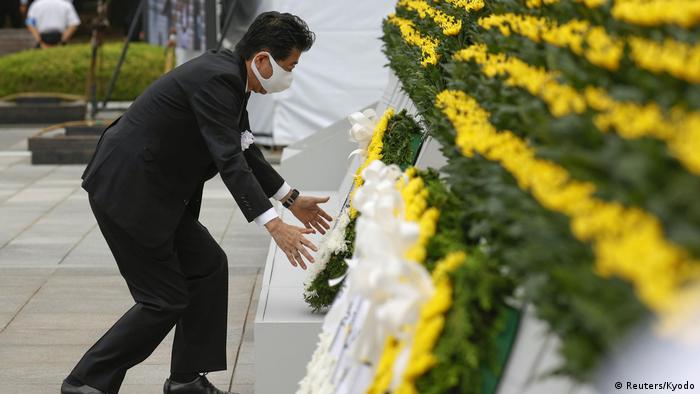 Prime Minister Shinzo Abe was among the 1,000 ceremony attendees

Matsui urged world leaders to commit more seriously to nuclear disarmament,pointing to his country's own failures.

"I ask the Japanese government to heed the appeal of the [bombing survivors] to sign, ratify and become a party to the Treaty on the Prohibition of Nuclear Weapons,'' Matsui said." As the only nation to suffer a nuclear attack, Japan must persuade the global public to unite with the spirit of Hiroshima."

Like the majority of the world's greater powers, including Germany, Japan did not sign up to an attempt by smaller non-nuclear countries to establish a treaty banning nuclear weapons, the Treaty on the Prohibition of Nuclear Weapons, in 2017.

Some critics say this stance betrays a degree of hypocrisy on the part of the Japanese government, which hosts 50,000 American troops and is protected by the US nuclear umbrella. Forced to demilitarize in the aftermath of World War II, Japan became dependent on the US defensively, facing nuclear neighbors China and quite probably now also North Korea.

Germany's top diplomat  Heiko Maas on Wednesday made a pleafor "new impulses for nuclear arms control and nuclear disarmament," adding: "The world must never forget what happened in Hiroshima and a few days later in Nagasaki — and why."

In a video address, United Nations Chief Antonio Guterres announced: "May the suffering, stories and resilience of survivors unite us in action to free the world of nuclear weapons."

"It has never been clearer than for peace to flourish, all people need to lay down the weapons of war," the head of the Catholic Church said in a message to mark the anniversary.

The US has never apologized for the nuclear bombings, asserting that they were the only way to bring the second World War to a rapid conclusion against a country unlikely to surrender to conventional force.

North Korea has claimed significant advances in testing a thermonuclear bomb. But how is it different to an atomic bomb? DW takes a look at the fundamental differences between two of history's most destructive weapons.

Moscow has condemned Japan's decision to not invite its representatives to the annual ceremonies marking the atomic bombing of Hiroshima and Nagasaki in response to Russia's war on Ukraine.