Jan Fischer appointed as the new Czech prime minister | Europe | News and current affairs from around the continent | DW | 09.04.2009

Non-partisan Fischer is to take over from outgoing Prime Minister Mirek Topolanek who lost a vote of no-confidence in March. The new job will see Fischer also take over as President of the EU. 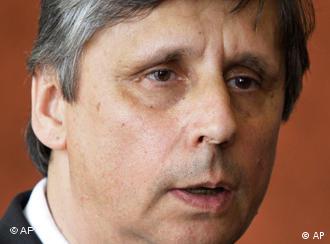 Czech President Vaclav Klaus appointed non-partisan Jan Fischer as new Prime Minister on Thursday. Fischer will take over from Mirek Topolanek who lost a no-confidence vote on March 24. The 58-year-old will also take over at the helm of the European Union, as the Czech Republic currently holds the rotating Presidency of the EU.

Fischer said he plans to start picking ministers next week and will take over from Topolanek only after President Vaclav Klaus appoints the entire cabinet. Political parties, which agreed to form the Fischer-led interim government, want Klaus to install the new cabinet on May 9.

"This government will have to cope with the EU presidency ... and within its capabilities mitigate the impact of the economic crisis," Fischer said following his appointment. 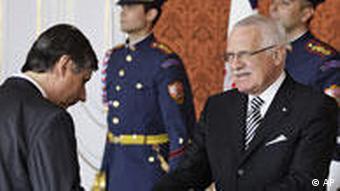 Fischer during the inauguration with Czech President Vaclav Klaus.

He said the government would also have to prepare the 2010 budget, a key task as revenues fall and the parliament plans tax cuts and extra spending.

Jan Fischer is an economist by training and has headed the Czech Statistics Office. He spent most of his career in the public sector and academia. A novice in top politics, he is regarded as a compromise choice acceptable to the country's two large parties.

Under the deal, early elections are scheduled for October 2009. The parties have agreed on a bill, which would cut short the four-year term of parliament's lower house.

Czech Prime Minister Mirek Topolanek's government formally resigned in a move that may cripple Prague's ability to chair the European Union and threaten a treaty designed to reform the bloc. (26.03.2009)