Famous for many roles including that of James Bond, actor Sean Connery has died. He rose to fame as James Bond and stole the hearts of women all over the world. Later, he won awards with character roles. 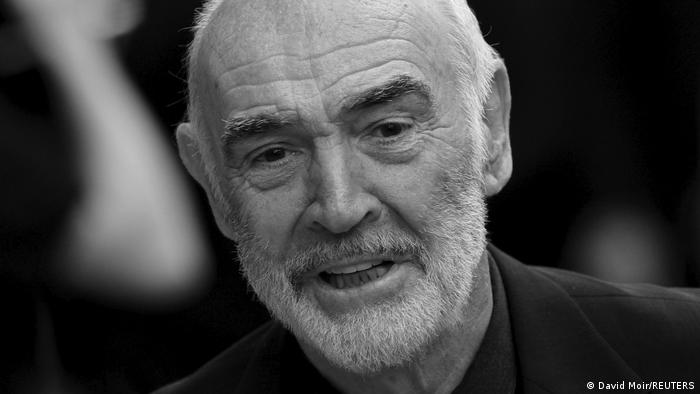 He was the first James Bond, and for many fans, the best one. The legendary actor Sean Connery died at the age of 90.

But the actor's achievements and good looks were recognized throughout his lifetime as well. Connery was voted "Sexiest Man Alive" by People magazine at the age of 59, and 10 years later, another survey determined that he was the "Sexiest Man of the Century."

Managing to maintain a heartthrob status well at an advanced age would be an achievement for any actor — but as years passed, Connery's charisma seemed to grow. With his silver hair, healthy tan, and muscular stature and dazzling charm, Sean Connery was a world star, in front of and behind the cameras.

By the time he had been voted "Sexiest Man Alive" in 1989, the Scotsman was already far advanced in his career. Connery had become a legend as a James Bond actor, and had earned also respect even from contemporary critics in his impressive roles. He garnered an Oscar, and was often viewed as an involved and committed figure in public life.

This was not foreseeable at the beginning of his career. Born in Edinburgh on August 25, 1930, he had a humble background. He left school early and struggled to make ends meet through odd jobs. But even at a young age, he already had an athletic body. He used that to his advantage and began doing intensive bodybuilding. This allowed him, among other things, to win a Scottish bodybuilding championship as well as work as a nude model at the art academy.

Taking off as James Bond

Both the theater and film world took notice of the athletic beau. Starting in the mid-1950s, he took roles as a supporting actor, but with rather limited success. It wasn't until two Hollywood producers were looking for an actor for a new spy movie after others had rejected the offer, that the young Connery took a chance, auditioned for the role — and was cast in what would become the part of his life.

The first Bond film, Dr. No, became a box office hit in 1962. Connery proved to be the ideal choice for the role of the British secret service agent.

Numerous sequels followed, turning Connery into an international star. But to him, even that just wasn't good enough — and he also claimed to be underpaid. After the fifth Bond film, there was a break. The actor began to seek out other genres, and ended up playing some very demanding roles.

A first (and better paid) comeback as Bond followed in 1971 with Diamonds Are Forever — but he donated his record salary of over $1 million to a Scottish educational charity he co-founded. And 12 years later, he could be persuaded once again to play Bond in Never Say Never Again, which became a huge success — and was his final farewell to the role. Today, he's still often lauded as the best Bond of all time.

Oscar for The Untouchables

In the meantime, Connery was establishing his reputation as a serious actor — with varying degrees of commercial success. He gave some remarkable performances in The Man Who Would Be King (1975), The Name of the Rose (1986) and The Untouchables (1987), for which he received his only Oscar.

In between, often in supporting roles, he helped make big Hollywood blockbusters even more successful. Movies like Highlander (1985), Indiana Jones (1989) and Robin Hood (1991) hugely benefited from his middle-aged charm.

In the 1990s, Sean Connery performed in a few less notable films, but by then he had already developed other interests.

When he was knighted by Queen Elizabeth in 2000, the Scottish patriot was clad in a kilt during the ceremony. He was later honored by his hometown Edinburgh with the Freedom of City award, which he considered to be more important than knighthood.

The actor had always been a vocal support of independence for his native Scotland, and he established a foundation to benefit talented young Scots.

He officially retired from acting upon receiving the American Film Institute's Lifetime Achievement Award in 2006. Beyond a few voice roles for special projects, his performance in The League of Extraordinary Gentlemen (2003) was his final one. Not a bad title for a last movie — as Sean Connery has proven for decades to be a true gentleman both on and off-screen.