Italy's top court scathed prosecutors for sloppy work and careless handling of evidence in the case against Amanda Knox. She was acquitted in March for the 2007 murder of her British roommate. 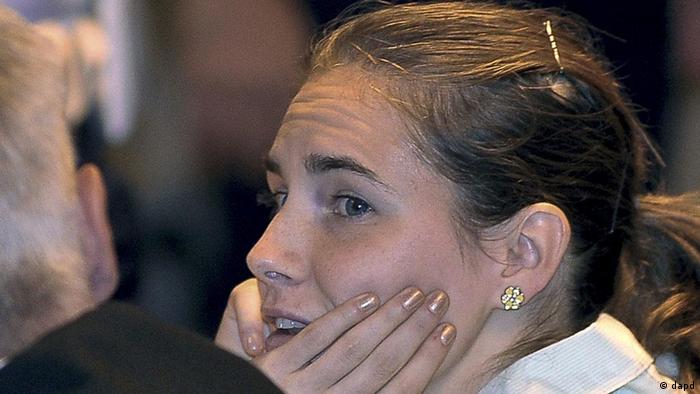 Italy's top criminal court has scathingly faulted prosecutors for presenting a flawed and hastily constructed case against Amanda Knox and her former Italian boyfriend, Raffaele Sollecito. The Court of Cassation said it threw out their convictions for the 2007 murder of Knox's British roommate because there was no proof they were in the room where the woman was killed.

The brutal stabbing of 21-year-old Meredith Kercher in Perugia had prompted a series of contradictory rulings, which finally ended in March with the acquittal of Knox and her boyfriend Sollecito while casting an uncomfortable spotlight on Italy's legal system. The legal meandering which produced two convictions, two acquittals and four years each in jail was due to "deplorable" carelessness right from the start of the probe, the court said.

Had the investigation not been so shaky, "in all probability" the defendants' guilt or innocence could have been determined from the earliest stages, the panel of five judges said.

The decision to overturn the conviction, which had called originally for 28 years in jail for Knox and 24 years for Sollecito, had surprised some in Italy who were expecting the case to be sent back to a lower court. Know and Sollecito have both maintained their innocence throughout the trials. The court only upheld a sentence against Knox for falsely accusing Congolese barman Patrick Lumumba of the murder.

The Court of Cassation also said in its formal written explanation that avid media attention paid to the killing and the nationalities of the people involved led to "a spasmodic search for one or more guilty parties to offer up to international public opinion" which "certainly did not aid the search for the truth".

"The international spotlight on the case in fact resulted in the investigation undergoing a sudden acceleration," the judges wrote.

The court said there were no biological traces in the room where the murder had been committed - not on the victim's body, on Knox or Sollecito. It slammed the quality of the prosecution's case from the start.

Among its findings, the court highlighted that a kitchen knife found at Sollecito's house and alleged to be the murder weapon was kept in a cardboard box, "the kind that gadgets are wrapped up in for Christmas." It added that a bra clasp said to have carried DNA evidence was left on the floor for 46 days, possibly trodden on and later passed between people wearing dirty latex gloves. The two women's computers, which could have yielded new information, were also "incredibly" burned by investigators. Even the supposed time of death, as argued by prosecutors, reflected a "deplorable approximation," the panel of judges wrote.

In light of these findings, the court said that re-examining the evidence would have been useless as there would be no chance of drawing reliable conclusions from the small amount of evidence available.

"There was no shortage of glaring errors in the underlying fabric of the sentence in question," the court wrote in the official explanation of its reasons for striking down the second guilty verdict handed to the pair.

The court's ruling vindicated the pair once and for all in the murder of Meredith Kercher. The judges said they ruled out the possibility of ordering yet one more trial. Another trial would have been "useless," they said, after citing contradictions in the prosecutors' case and listing problems with handling of the evidence.

Meanwhile the third person accused of the murder, Ivory Coast-born Rudy Guede, who is currently serving a 16-year sentence after opting for a fast-track trial, left "copious" biological traces at the scene, the court said.

"I am deeply grateful that the Italian Supreme Court has filed its opinion and forcefully declared my innocence. This has been a long struggle for me, my family, my friends, and my supporters," Knox said in a statement posted Monday on her website.

"I will now begin the rest of my life with one of my goals being to help others who have been wrongfully accused."

An Italian court has opened a new trial for the American Amanda Knox over the murder of her British roommate. Knox, whose original verdict was overturned in 2011, has not returned to Italy for the trial. (30.09.2013)