As people continue replacing the gadgets they carry around, landfills threaten to overflow with outdated electronics. An Italian consortium has a way to slow down the overload with trash bins that keep the waste sorted. 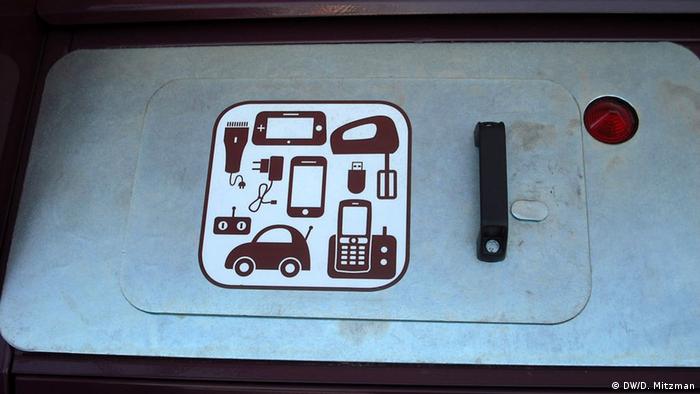 The explosion of technological appliances and gadgets in recent years can be seen in the trash. It is estimated that the world produces some 50 million tons of waste from electrical and electronic equipment (WEEE), with Europe producing some 20 million tons of this. An Italian company is looking at how to address the problem of collecting, disposing and recycling high-tech waste.

Identis Weee, a 3.5 million euro ($4.6 million) EU-supported project, was developed by the Hera Group and Ecolight Consortium in Italy, and the Ecolum Foundation in Spain. The aim is to double the collection of materials such as mobile phones, electronic games, televisions, computers and other appliances. The smart dumpsters have also been specifically designed to make WEEE traceable so it can be more efficiently disposal of or recycled.

The prototype intelligent bins have been placed in strategic locations in the Emilia Romagna region, where they will remain until the end of summer. In the capital city of Bologna and in other larger towns, the dumpsters are located at strip malls or shopping center car parks. In smaller towns, citizens can find them on main roads or near paper, plastic and glass recycling points. 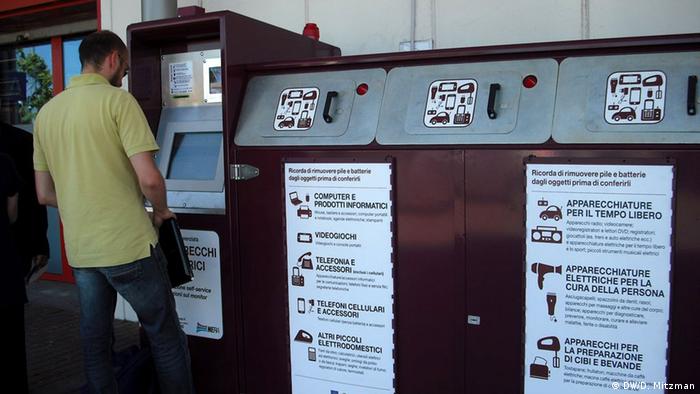 The garbage bins are still in the trial phase in Italy, but their creators hope to expand the program

According to recent UN Environment Program data, currently only 10 percent of the annual 50 million tons of WEEE is recycled. In 2012, Italy collected 240,000 tons of WEEE, approximately 4 kilograms per person. The Emilia Romagna region was the third biggest collector, with more than 23,000 tons, or between 5 to 6 kilograms per person. That still leaves more than 70 percent of WEEE not being collected.

Some 19,000 families have been given special magnetic cards to use during the trial phase, but the smart bins can also be personally activated using regular National Health Insurance cards. To use the bins, a user holds up the bar code to the reader on the touch screen and a voice starts giving instructions. Paolo Paoli, who is responsible for technical coordination and innovation of environmental services at Hera Group, said the system is very easy to follow.

"After identification, the user has to indicate on the touch screen what type of WEEE he has delivered," Paoli explained. "Then the prototype opens."

The simple process also allows Hera to collect and analyze demographic data about the users and the kind of WEEE they are producing.

Following delivery, the waste's path is also fully traceable. The dumpsters are connected via wireless or the mobile phone network with a data processing center, and data collected by the dumpsters is added to a database.

"There is a big server that communicates with every prototype in real time," Paoli said. "We have some devices to check the weight or the fill level. We have a complete traceability process of unloading, transport and treatment of the WEEE contained in this prototype."

The project aims to prevent environmental and health problems caused by incorrect disposal of potentially hazardous materials contained in WEEE. Paoli said the smart bins could make a major difference. 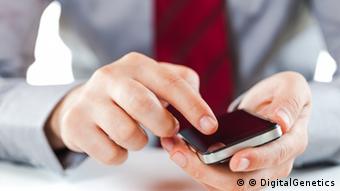 "We can enforce correct treatment to recycle and recover about 85 or 95 percent of this waste," he said.

The impact would, he added, be felt worldwide. Despite progressive EU legislation, around 75 percent, or some 8 million tons, of Europe's electronic waste is illegally exported to developing regions, where there are often lax environmental and health regulations concerning electric and other forms of waste.

"There are no important treatment plants that can manage this type of waste in a correct way," Paoli said, "and so it generates a social, environmental and economic problem for the whole world."

Another benefit is that WEEE also contains valuable materials such as silver and gold, which can be recovered and reused in new devices - which reduces mining and other extractive activities.

Several major retail chains including Media World and IKEA are taking part in the pilot project, with smart bins located in front of their doors. At the end of the trial phase, those citizens who have participated most actively - by bringing the largest quantity of WEEE to the smart bins - will be given vouchers to spend at these or other shops and supermarkets.

A Green Party member of paliament has proposed that Germans pay a 10-euro deposit on their mobile phones. The money would then be refunded once the phones are properly recycled at the end of the product's life. (09.03.2012)

The European Union is rewriting the rules on dumping electronic waste with the aim of putting an end to illegal shipments to Africa. In Ghana in particular e-waste is a major source of pollution. (03.02.2012)