A gas explosion triggered the collapse of a number of buildings in Sicily. Emergency workers have been searching the rubble of those missing, including two children and a pregnant woman. 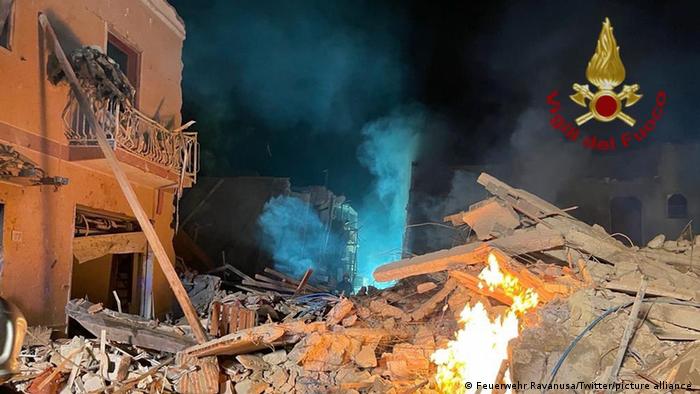 Three buildings collapsed and a further three were damaged in Sicily, according to reports

At least three people died and several others, including children, were missing after several buildings collapsed in the Sicilian town of Ravanusa following a gas explosion, Italian emergency services said early Sunday.

"The search continues to the bitter end. We are searching in the hope of finding our six fellow citizens still alive," Ravanusa Mayor Carmelo D'Angelo said, according to Italian news agency AGI.

"We have the whole country on our side, and the best human and technological resources are in place. Hope will not be extinguished," he added.

One of the buildings was on fire after a methane leak caused the blast at about 8:30 p.m. local time on Saturday.

The explosion, in the town of 11,000 near the Sicilian city of Agrigento, affected four buildings, according to Sicily's civil protection unit DRPC Sicilia.

However, Italian news agency ANSA later cited it as saying that six buildings were hit.

Rescue workers were able to contain the fire triggered by the explosion around 11:15 p.m., but emergency workers could access the site due to "pockets of gas," DRPC Sicilia said.

About 250 rescuers, including civil protection volunteers, joined the operation, aided by sniffer dogs and overhead drones.

They started to search the rubble for missing residents, including a young couple expecting a baby and two children.

One body was pulled from the rubble, DRPC Sicilia said, adding that two women were rescued and a further eight people remained missing.

An elderly woman was rescued from the rubble of a building "probably near to those affected by the disaster," DRPC Sicilia said in an update early Sunday.

She suffered mild trauma and had been transferred to the hospital in the nearby city of Licata, the civil protection unit said. She suffered minor injuries, including some fractures, it added.

Another woman — believed to be the first one's sister — was pulled out soon afterward, said DRPC Sicilia head Salvo Cocina.

Out of those still missing, nine were in the same building at the time of the explosion, ANSA reported.

"The search for the other missing persons by urban search and rescue and canine units continues unabated," firefighters said in a tweet.