About 50 people have died after a boat carrying hundreds capsized off the coast of Lampedusa. The number of deaths from last week's shipwreck near the southern Italian island has also risen (pictured). 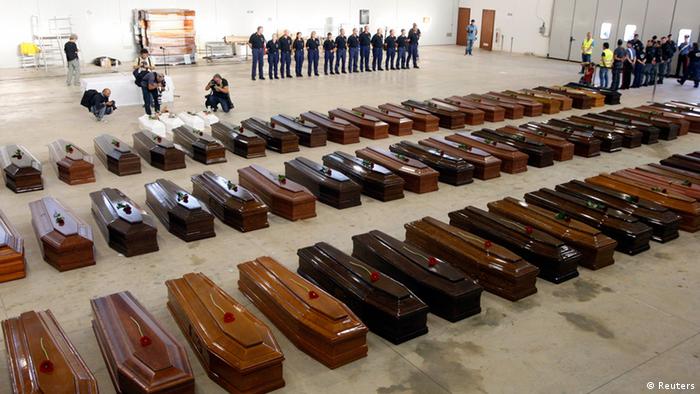 Several Italian patrol boats left the port of Lampedusa Friday afternoon toward the shipwreck between Tunisia and Sicily. Quoting navy sources, the ANSA news agency reported that rescuers had spotted bodies floating in the water.

"We received a report of a major incident around 4 p.m. (0200 UTC)," Maltese government spokesman Kurt Farrugia told the German news agency DPA, adding that a Maltese boat was first on the scene. "We were first told that the craft appeared unstable, but it had then capsized," he added. "We're informed that numerous people are in the water. Some are wearing life jackets. Others are not. Italian patrol vessels are also assisting."

Officials believe the vessel carried 200 to 250 migrants. The accident comes after Italy's coast guard announced that it had rescued 503 migrants in five salvage operations between Thursday and Friday, and escorted them to the Sicilian towns of Porto Empedocle, Trapani and Syracuse.

In Lampedusa, Italy's southernmost territory and a primary entry point for migrants, officials found more bodies from the October 3 wreck of a boat carrying about 500 people, bringing the provisional death toll to about 320. More than 150 people, including about 30 unaccompanied children, survived that accident, but rescuers continue to search for bodies floating at sea. On Thursday, officials said that the sunken vessel, lying almost 50 meters (165 feet) under the ocean, held no more victims.

According to the UN High Commissioner for Refugees, 32,000 people have arrived in southern Italy and Malta this year alone, about two-thirds of whom have filed requests for asylum.