Beekeepers in Italy are joining forces in the fight against varroa mites. The mite is blamed for spreading a virus that has decimated hives around the world. 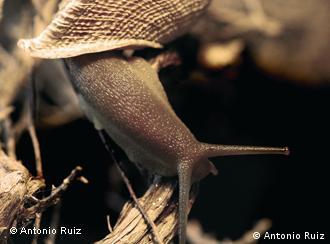 This snail is one of Europe's many endangered species

Bees are essential to our ecosystems. Through pollination, they sustain 84% of all plant life. Over the past decade, Colony Collapse Disorder (CCD) has decimated bee populations worldwide. A colony usually collapses when its adult bees disappear, destroying the perfectly-balanced structure of the hive and leaving the young bees to die.

Causes of CCD include the pesticide exposure, lack of food caused by monoculture farming and climate change. But, researches are now most concerned about the presence of parasites, in particular the varroa mite. 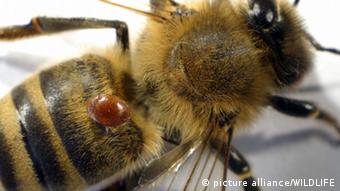 Varroa infestations in beehives are believed to cause the mutation and rampant spread of this normally latent virus. The virus causes deformities in the wings, abdomen and head of the bee, which cripple the it and drastically reduce its life span.

Diego Pagani is the president of Conapi, the National Consortium of Beekeepers. The organization has more than 450 members, they oversee regional quality control and they distribute 2,300 tons of honey each year. Pagani, his brother, his uncle and cousins are all beekeepers. He remembers a time when most Italian farms kept a couple of beehives to provide enough honey for family and friends. In an interview with DW, he explained that things changed with the arrival of the varroa mite in Italy in the early 1980s.

"The tradition of micro-beekeeping has completely disappeared," said Pagani. "Beekeeping has had to become a specialist scientific profession which involves constant study of biology and chemistry."

Italy's beekeepers are acutely aware of the threat varroa mites present. Pagani once lost half of his bees to CCD. He managed to keep his colonies going, but continues to worry about the future. "I constantly feel like I've got a sword dangling over my head because there's an evolution of the external environment as well as the bees and the mite itself," he said. 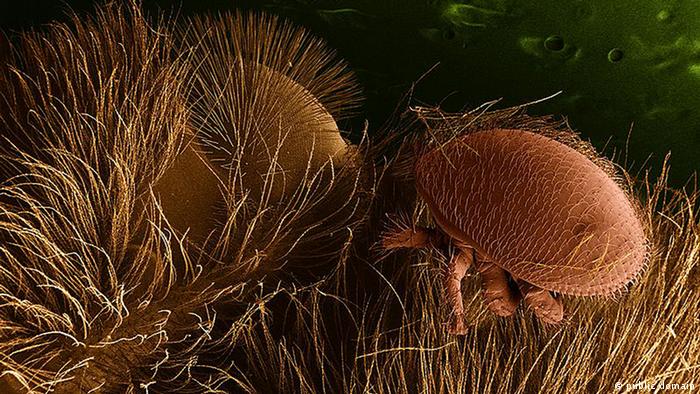 The varroa infest colonies very quickly and even once the mites have been eradicated from a hive, the virus remains. Diego Pagani explained that a quick response is key in saving the hive.

"We have to act quickly to keep the Varroa from multiplying. If we already start off with a high level of infestation because we didn't act efficiently enough in the winter or in previous treatments, the fact that the number of mites doubles every month will lead to the colony collapsing before we're able to intervene."

Italian beekeepers consider their approach avant-garde. Pagani himself is constantly experimenting with new methods for combating varroa and exchanging information and advice with his colleagues.

The varroa travel through the hive on the backs of the nurse bees. As the nurse feeds the larvae, the mite slips into the larvae chamber. This chamber is sealed to allow for the metamorphosis of the bee, during which time the varroa feeds off the bee's blood. It multiplies inside the chamber. From one varroa mite, five or six can be born.

In the past, beekeepers used sponges impregnated with essential oils like thymol, eucalyptol and menthol. Mounted on boards inside the hive, the evaporating oils would kill the mites. But this method only works in the summer heat, when bees are breeding, so beekeepers have been searching for a winter plan. 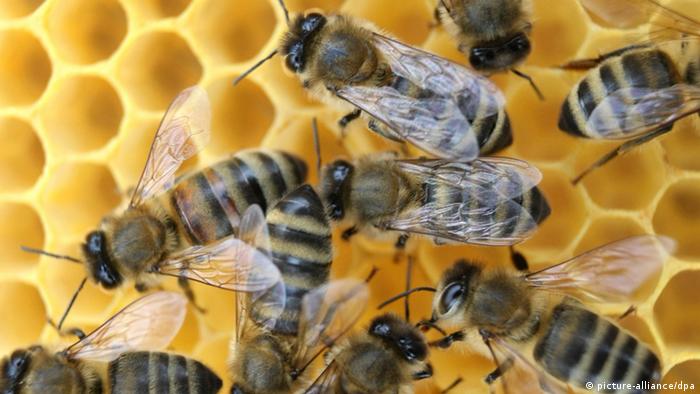 Bees enable food production by carrying pollen from one plant or flower to the next.

In recent years, Diego Pagani and his fellow beekeepers have been trying oxalic acid to treat infected colonies. They confine the queen and prevent her from depositing her eggs. All the bees in the hive are born and the larvae chambers are exposed. "At this point we carry out the treatment with oxalic acid and this allows us to eradicate between 90 and 95 percent of the mites," Pagani explained.

Diego Pagani's bee losses have dropped to around 15 percent. But this hasn't eased his fears about losing his colonies altogether.

"The varroa mite is fast, clever and always seems to be one step ahead, able to develop resistance to chemicals in a very short time," said Pagani. He added that Italian beekeepers have also noticed a worrying change in the potency of infection transmitted by varroa.

They have found that winter treatment with oxalic acid is most effective in damp, foggy conditions. The beekeepers now plan to implement a combination of oxalic acid and essential oil treatments, and will also begin experimenting with formic acid.

Pagani warned that the fight against the varroa is only just beginning and that without more research and treatment options, the bees may be wiped out completely. The National Consortium of Beekeepers has just finished working on a 3-year project called Apenet. They collaborated with Cra-Api, the Honey Bee Unit of the Italian Agricultural Research Council.

Marco Lodesani is the director of Cra-Api. In an interview with DW, he said the project has helped broaden their understanding of bee illness and Colony Collapse Disorder.

"The virus is latent to begin wth. But when a bee's immune system is stressed, it is weakened and more susceptible to developing diseases," Lodesani explained, adding that there are several factors working together to compromise bee populations.

"Varroa is not the only threat," he said.

Their report details how many pesticides, especially neonicotinoids, are toxic to bees, disorientating them and causing them to collapse. It also describes the dangers of monoculture farming. If a bee's diet is based on corn pollen alone, it will be more susceptible to the adverse effects of pesticides. Bees with weakened immune systems are also less able to fight the viruses spread by varroa mites.

Italy will be hosting the world congress for organic beekeeping in 2014. Diego Pagani hopes beekeepers and researchers will come to the talks with effective solutions for saving the world's bees.

The tropical forest in northern Guatemala is one of the world's most diverse eco-systems. It's also one of the most endangered. Now efforts are on to stop the widespread illegal tree-felling in the region. (08.11.2011)

Wolves, otters, bison and wildcats are some of the main attractions in Germany's recently-proclaimed UNESCO world heritage beech forest in Hesse. The forest is proving an especially big attraction for children. (04.08.2011)