Three journalists facing life sentences have been released pending appeal after eight years in prison in Turkey. The Committee to Protect Journalists ranks the country No. 1 for imprisoning press. 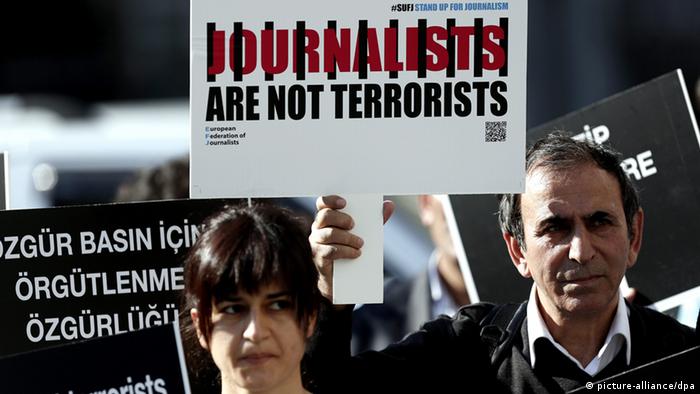 On Thursday, an Istanbul court released Bayram Namaz, Arif Celebi, and Fusun Erdogan, who also holds Dutch nationality, after eight years in prison, with an appeal pending. They had received life sentences in November for "terrorism."

The court released the journalists under a new law that caps imprisonment at five years before the conclusion of a trial - down from the previous ceiling of 10 years. The three had all worked for Ozgur Radyo (Free Radio), which has broadcasts in Kurdish.

"I can't find a word to express my feelings," said Erdogan, who helped co-found Ozgur Radyo in 1995 and later served as its director until her arrest in 2006.

Turkey has accused many of its imprisoned journalists of having ties to Kurdish groups. Part of the case against Erdogan stems from her alleged involvement in the banned Marxist-Leninist Communist Party, though she disputes that her lengthy detention had any valid ground.

"There was only one real reason for our arrest," Erdogan wrote last year in a letter from prison. "Police were trying to intimidate members of the progressive, independent, democratic and alternative media."

Rights groups have long criticized Turkey for its lack of press freedom. On Thursday, the European Federation of Journalists (EFJ) announced that 32 journalists remain in jail in Turkey, most of them for suspected links to the banned Kurdistan Workers' Party.

In 2008, a group of Turkish authors boycotted Germany's Frankfurt Book Fair to protest their government's clamping down on expression.

The release of the three journalists "has given us new hope for our campaign to decriminalize journalism in Turkey, but we need to go on for those journalists who are still behind bars in Turkey," EFJ President Mogens Blicher Bjerregard said on Thursday.

In December, the US-based Committee to Protect Journalists described Turkey as the world's No. 1 jailer of journalists for the second straight year, ahead of Iran and China.