A major new exhibition of Jewish art and artifacts, including one of the Dead Sea scrolls, opened to the public on Friday. It's the first time the scroll goes on display outside Israel. 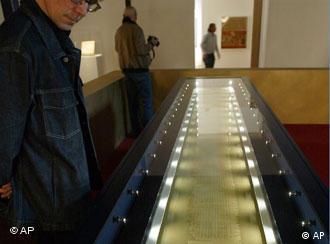 The 2,120-year-old scroll is heavily guarded and protected against light

"The New Hebrews, 100 years of art in Israel" was been organized by the Israel Museum in Jerusalem at Berlin's Martin Gropius Bau exhibition hall to mark 40 years of diplomatic ties between Israel and what was then West Germany.

The 3.6-meter-long (12-foot-long) Temple Scroll, which is being shown outside Israel for the first time, is one of the longest biblical texts found since the 1940s. It is estimated to be about 2,120 years old.

Bedouins discovered it in 1956 in the Judea Desert of the Qumran region, in caves overlooking the Dead Sea. It later disappeared and was recovered by Israel's secret service in 1967. 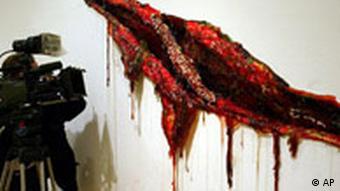 "The Dead Sea scrolls are a Mona Lisa for our museum and for Israel," said James Snyder, the director of the Israel Museum, as he presented the exhibition. "They are one of the ancient seeds for what would become the flowering of modern Israel."

Snyder added it was appropriate to exhibit the scroll among artworks because of the importance of the discovery of the Dead Sea scrolls for contemporary Israeli culture. 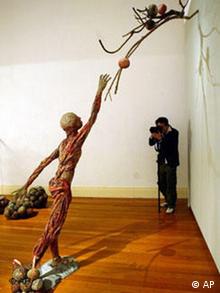 A sculpture by Israeli artist Sigalit Landau entitled "The Plucker"

A total of 700 artworks are on show, retracing in 15 chapters the evolution of Israeli culture from the first waves of Zionist immigration to Palestine to the creation of the state of Israel in 1948 and also takes in the intifada and the construction of the security barrier between Israel and the Palestinian territories.

The show includes paintings, photographs, installations, architectural models and videos from over 130 artists. The oldest works date from 1906.

The Holocaust, however, plays a relatively minor role in the exhibition because the subject was for a long time taboo in Israel, the exhibition's curator, Doreet LeVitte Harten, said. 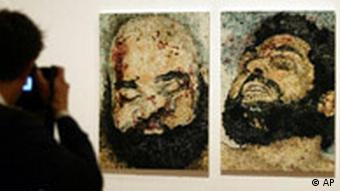 The "passivity of the victims" was not compatible with the strident image the new state was trying to create and those who had suffered at the hands of the Nazis did not want to discuss it, she added.

The 1961 trial of top Nazi official Adolf Eichmann was the trigger for Israelis to begin discussing their experiences during World War II, she added.

"It truly is a miracle that we may speak of friendship between Germany and Israel despite the millions of murdered Jews," he said.

One day after its official opening, Berlin's Holocaust Memorial has already become the focus of new criticism. This time it is not the monument itself in the spotlight, but the behavior of its young visitors. (May 13, 2005)

German Art Basks in the Glow of Success

Click here for DW-WORLD's dossier on the renaissance of German art.

The German foreign minister met his Israeli counterpart Wednesday in Düsseldorf to mark 40 years of diplomatic relations between the two nations. But friendship wasn't the only topic on the agenda. (May 19, 2005)

More information on the exhibition