One day after its official opening, Berlin's Holocaust Memorial has already become the focus of new criticism. This time it is not the monument itself in the spotlight, but the behavior of its young visitors. 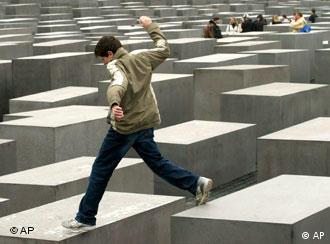 The sprawling memorial in remembrance of the suffering of the six million European Jews murdered under the Nazi regime is open all day every day of the year. And on day one, the public were making the most of such unusually liberal opening hours.

Berliners, Germans and visitors from all over the globe came in their thousands to wander through the surging field of concrete pillars and form their own impressions of architect Peter Eisenman's highly-publicized creation.

The 2711 concrete pillars, which vary in size and shape are set about a meter apart on an undulating ground, which is designed to recall the disorientation of the Holocaust victims. Unsurprisingly the reactions of the first flurry of visitors have been hugely diverse. 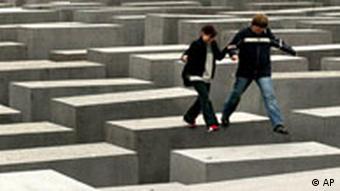 An unidentified couple jump over charcoal-colored concrete slabs of the Holocaust memorial in Berlin on Thursday, May 12, 2005, the first day the memorial was open to the public.

Among the first day's intake were school groups from across the country who seemed, in part at least, to relate better to the monument as a kind of maze-like playground than as a testimony to the darkest chapter in Germany's history.

One woman from the state of Brandenburg was appalled to observe youngsters climbing on the pillars and making a game of jumping from one to another.

"I can't understand why these young people can't behave in a more respectable manner, and moreover why none of their teachers intervene. Such misplaced instincts are unbelievable," she told Berlin's BZ newspaper.

Although the prescribed code of conduct requests that visitors do not climb or jump on the pillars, that they do not smoke, barbecue or sunbathe at the site, the place is largely devoid of official eyes, which means individuals are left to behave in accordance with the limits of their own consciences.

Peter Eisenman said he wanted visitors to the memorial to behave freely, and has said he can imagine it as a place where children play between the pillars or picnic on the fringes. He has made it clear that he wants it to be a part of every day life rather than a holy place.

But some visitors feel that the "playground factor" distracts them from respectful reverie provoked by the evocative atmosphere of the place.

Chairman of the Jewish Community in Berlin, Albert Meyer, said he had long feared that the memorial did not come from the heart of the public and that one must now recognize that it is a living monument, with all the advantages and disadvantages it brings with it.

Just what they are will become more obvious with time. At the moment, the monument has to be worked into the fabric of the city, and people have to find their way through the pillars to form their own opinions.

If there is any general sentiment it is that the memorial is a good thing. There is high praise also for the underground information center which documents the fates of Europe's murdered Jews.

Lea Rosh, the chairwoman of the memorial's foundation, meanwhile backtracked on a plan to bury a tooth she found at Belzec concentration camp in one of the pillars.

Jewish groups were outraged when Rosh announced her intentions during the opening ceremony on Tuesday, saying that they it was blasphemous to bury human remains outside cemetaries.

On Friday, Rosh said she would return the tooth to the former death camp in Poland, where it will be buried.

The Holocaust memorial in Berlin officially opens to the public on Thursday, but the occasion is being overshadowed by a dispute over plans to set the tooth of a murdered Jew into one of the site's 2711 stone pillars. (May 12, 2005)

Sixty years after the end of WWII and 17 years after its inception, a German memorial to the Jewish victims of WWII genocide has been dedicated in Berlin. (May 12, 2005)