Several Israeli teenagers have died after their group was hit by flash floods during a hiking trip near the Dead Sea. Israeli authorities have now mounted a large-scale search for survivors. 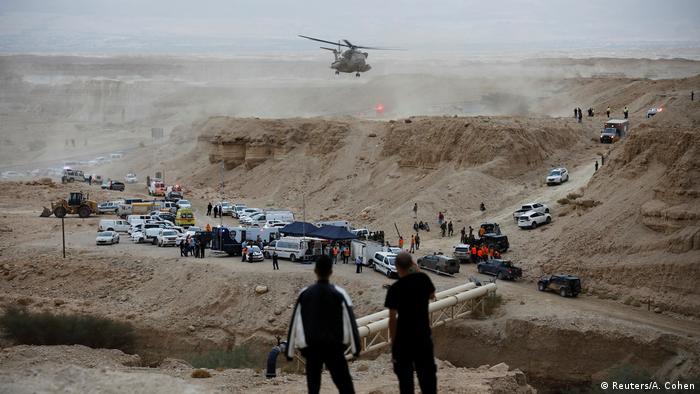 At least nine Israeli teenagers died Thursday after being swept away in a sudden flood in the Negev desert. Another member of the group of 25 is still missing.

The students, aged 17 and 18, were hiking along a usually dry riverbed of Nahal Tzafit as a part of pre-army training course.

Police spokesman Micky Rosenfeld said the trekkers were "caught off guard" by the flood and some of them were "washed away."

"Police & Emergency teams working together after flash floods struck the south of Israel near the Dead Sea where students were on a day trip," he wrote on Twitter.

Of the nine teenagers who lost their lives, eight were female and one was male. The missing student is also female. Authorities mounted a large rescue effort and deployed military and police helicopters in the search for the remaining teenager, but the operation was suspended by nightfall due to heavy thunderstorms. Rescue teams are scheduled to be redeployed on Friday morning.

Read more: Floods and how to stop them

The usually dry areas of North Africa and the Middle East have been hit by intermittent heavy rainfall in recent days. On Wednesday, a teenage Bedouin and a Palestinian girl also died in flash floods that hit Israel and Palestinian territories. Separately, Algeria announced six people lost their lives in the last 48 hours.