The war between Israel and Hamas militants in the Gaza Strip has entered its 47th day, with Israeli air strikes countering Hamas rocket fire. Meanwhile, Hamas says it has backed a Palestinian bid to join the ICC. 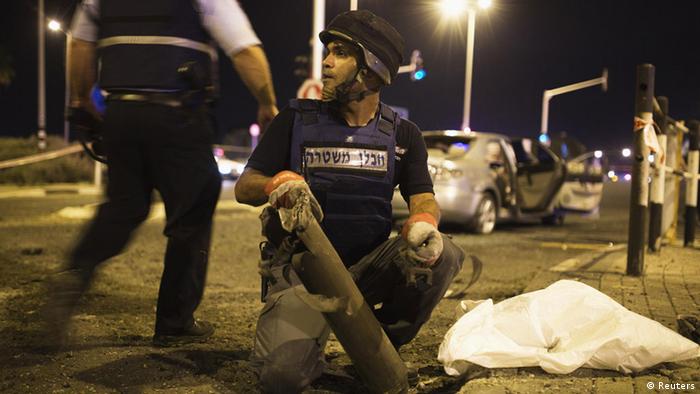 Israeli aircraft bombed the Gaza Strip on Saturday, killing five Palestinians from the same family, as the conflict in the Palestinian enclave entered its 47th day.

Gaza health officials said the five people, including two children, were killed in an Israeli airstrike on a house in Al-Zawayda in central Gaza. The Israeli military said it had carried out more than 20 aerial attacks on Gaza on Saturday.

Eighty-one Palestinians and a four-year-old Israeli boy have been killed since truce talks collapsed on Tuesday following nine days of calm.

Israeli Prime Minister Benjamin Netanyahu said on Friday that the army would retaliate harshly for the killing of the boy, who was hit by shrapnel that tore through his home in the kibbutz Nahal Oz in southern Israel. He was the first Israeli child killed since the current conflict began on July 8.

At least 2,097 Palestinians have died since the violence erupted, 70 percent of them civilians, according to the United Nations. On the Israeli side, 68 people have died, all but four of them soldiers.

On Friday, Hamas executed 18 people it accused of collaborating with Israel.

No resumption of the indirect negotiations, brokered by Egypt, has been announced. The two sides failed to reach agreement on core demands, with Hamas demanding that Israel lift an eight-year blockade on Gaza, and Israel calling for Hamas' complete disarmament.

Meanwhile, Hamas has reportedly signed a proposal for the Palestinians to apply to join the International Criminal Court (ICC).

"Hamas signed the document which (Palestinian) President (Mahmoud Abbas) put forth as a condition that all factions aprove, before he goes to sign the Rome Statute, which paves the way for Palestine's membership in the International Criminal Court," Hamas deputy leader Mussa Abu Marzuq wrote on his Facebook page.

Joining the ICC would expose both Hamas and Israel to war crimes investigations, with both sides accusing each other of atrocities since the outbreak of the latest war.

President Abbas has debated for months whether to join the court. The step would transform his relations with Israel from tense to openly hostile.

Abbas had said that he would only go ahead with the bid if Hamas supported it, but it is still no clear whether he will do so.

Israel opposes involving the ICC, arguing that Israel and the Palestinian sould deal with any issues directly.

The ICC, based in The Hague in the Netherlands, opened its doors in 2003 as the first independent court in the world set up to try the worst crimes, including genocide and war crimes.