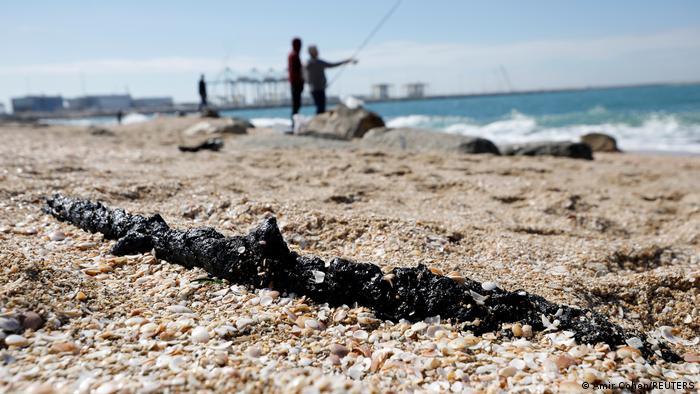 Israel's authorities warned people on Sunday to stay away from the beaches on its Mediterranean shore, as thousands of laborers and volunteers worked to clean a massive tar slick.

The tar was a result of "dozens to hundreds of tonnes" of oil being unloaded from a ship, according to estimates by the environmental protection ministry.

Israel's Nature and Parks Authority has called the spill "one of the most serious ecological disasters" in the country's history. Officials said the clean up may take months, or even years.

Activists reported globs of black tar on Israel's coast last week, after a heavy storm, with powerful winds and unusually high waves. Local wildlife has been gravely affected. Authorities reported that the body of a young fin whale had washed up ashore, after it died from ingesting the black liquid.

People were asked to avoid the beaches for bathing, sport and leisure, until further notice. During a visit to the southern city of Ashdod, Prime Minister Benjamin Netanyahu said the government would be allocating funds on Monday for the beach clean ups. Wildlife has been affected by the oil spill.

"We need to look to the future - this event and similar ones around the world show us how crucial it is to wean ourselves from these polluting fuels, and shift to renewable energy," said Environmental Protection Minister Gila Gamliel.

Representatives from Israeli environmental protection agencies said the government was underfunded to deal with such disasters, and that there was not adequate legislation in place to prevent such a disaster in the future.

The Japanese ship operator of the tanker that leaked over 1,000 tons of oil off the coast of Mauritius in July has pledged $9 million toward clean-up efforts. The oil spill has damaged mangroves and coral reefs.

Israel has begun easing its lockdown after data from its health ministry showed that the BioNTech-Pfizer vaccine is highly effective in preventing serious illness from COVID-19.

Britain's Supreme Court has ruled that more than 40,000 people can make claims against the European energy giant following decades of oil spills in the Niger Delta region.