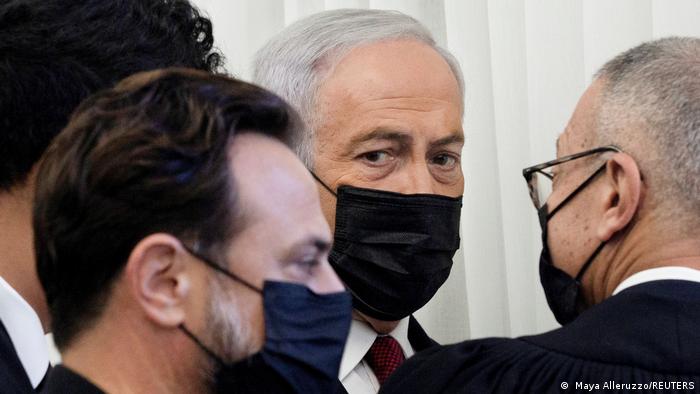 Talks between the former prime minister and the attorney general have hit an impasse over the possibility that Netanyahu be excluded from running for political office again, according to sources cited by the AP and Reuters news agencies.

Netanyahu objects to being convicted under the "moral turpitude" clause that could force the 72-year-old from the political arena for years. He hopes to plead guilty to lesser charges and do community service rather than face jail time.

The deal could be signed as early as this week, the AP reports.

On Saturday night, protesters gathered outside Mandebilt's home to object to any deal with the country's former prime minister.

Health Minister Nitzan Horowitz tweeted, "The man who worked to destroy the public's trust in the foundations of democracy for personal reasons is not eligible for deals."

Any plea deal is likely to be challenged in court.

What charges does Netanyahu face?

Netanyahu faces three cases that include bribery, breach of trust and fraud. The cases are being tried together.

The first case alleges that he received hundreds of thousands of dollars in gifts from rich acquaintances.

The second case alleges Netanyahu attempted to swap positive coverage for legislation that would have devastated a major newspaper's leading rival.

And the last case alleges he supported legislation that would have saved the owner of Bezeq, an Israeli telecom firm, hundreds of millions of dollars in exchange for favorable coverage on the Walla news site.

Netanyahu pleaded not guilty to all charges.

What's next for Benjamin Netanyahu?

What are the potential implications for Israeli politics?

Likud, Netanyahu's party, failed to form a government last year because parties it often aligns with would not support Netanyahu due to the ongoing corruption cases.

Now in the opposition, Netanyahu has vowed to topple Naftali Bennett, who succeeded him with the support of a diverse coalition.

Bennett takes over as Israeli PM

Theoretically, if Netanyahu can move beyond his legal difficulties of the moment, he could return to politics with a new coalition of parties on the right.

If Netanyahu were to be barred from politics in Israel, conservative parties in Bennett's coalition could ditch Bennett and opt to form a coalition with Likud under new leadership.

The judiciary has had to defend itself for years against attacks by Netanyahu and his allies that the charges and case against him are politically motivated.