Is the ECB allowed to buy sovereign bonds? | Business | Economy and finance news from a German perspective | DW | 12.01.2015

Is the ECB allowed to buy sovereign bonds?

The European Court of Justice is looking into whether the ECB's plan to buy sovereign bonds is really within its mandate. Experts expect the central bank to start its program soon, in a bid to head off deflation. 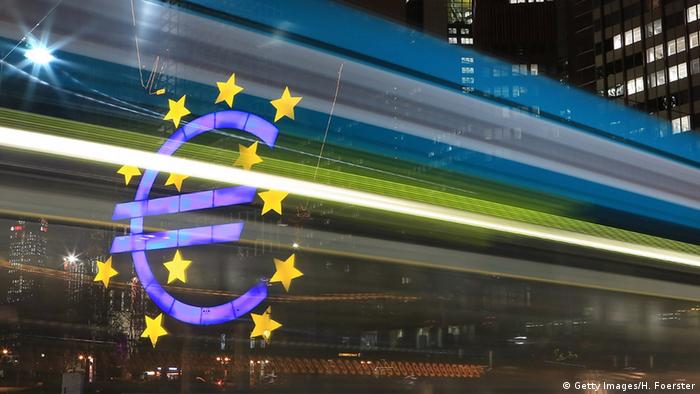 "The ECB is ready to do whatever it takes to preserve the euro" - that legendary sentence, which was uttered by the president of the European Central Bank, Mario Draghi, on July 26, 2012, had a greater impact on eurozone economies than all the rescue measures taken for the single-currency bloc in the two previous years.

Investors and speculators were deeply impressed by the "whatever it takes" bit of the sentence - to such an extent that they stopped doubting the survival of the euro, and stopped attacking the currency with speculative transactions.

Draghi's words were interpreted to mean that the central bank might buy up sovereign bonds if the latter couldn't be sold on financial markets. As a result, Draghi never actually had to do so - the yields on sovereign bonds issued by countries in distress dropped quickly back down to a manageable level. Bond speculators knew that the ECB's balance sheet is unlimited - they would never be able to overpower it.

The snag about Draghi's comment was that it wasn't coordinated with the ECB's Governing Council. The head of Germany's central bank, Jens Weidmann, for example, wouldn't have thrown his weight behind it. He believed such a bond-buying program would go too much in the direction of direct financing of Eurozone national governments, which is expressly prohibited by the European Union's founding Maastricht treaty.

That's why in early September 2012, Weidmann voted against the Outright Monetary Transaction (OMT) program that stipulated the conditions under which the ECB might purchase sovereign bonds issued by crisis nations. on secondary markets.

It's worth emphasizing that the ECB has, as yet, purchased no sovereign bonds under the OMT program. The mere existence of a program that allows the ECB to buy sovereign bonds in unlimited quantities, if it so chooses, has kept bond yields low, even for countries like Greece or Spain that had faced skyrocketing interest rates on sovereign bond markets before OMT was announced.

The problem, however, is that OMT may be illegal under European law.

Some German politicians and economists took the OMT project to Germany's Federal Constitutional Court, among them lawmaker Peter Gauweiler from the Christian Social Union party in Bavaria.

He said the ECB was not entitled to offer the large-scale purchase of sovereign bonds that no one else was willing to buy. Gauweiler said the ECB would thus foist liabilities on its shareholders - a third of whom are German taxpayers - without having a mandate fur such a move. The plaintiffs argued the OMT program violates budget legislation of the lower house of the German parliament, the Bundestag, by accepting big risks for taxpayers.

A Fresh Start - Joining the ECB in Frankfurt

A fresh start - joining the ECB in Frankfurt

The court's verdict would not have been binding for the ECB, but it could have forced the Bundesbank to leave the OMT program, which in turn could have meant the end of the euro.

But such a consequence was too heavy a burden for the judges to take on their shoulders, even if they doubted the legitimacy of the ECB's plan. In February 2014, therefore, the judges referred the matter to the European Court of Justice (ECJ) - without giving up the right to hand down a verdict of their own at a later stage.

Will the ECJ see things differently?

The Luxembourg-based court has since been looking into whether or not the ECB's proposed unlimited bond-buying program would run afoul of EU legislation. On January 14, the Advocate-General is to speak out on the matter, and his words are usually heeded by the court in the final analysis.

If the judges say "no" to the program, turbulence can be expected in financial markets - since financial players have already priced in the effect of the bond-buying scheme.

But most pundits expect the ECJ to rubber-stamp the OMT program. "In the past few years, the ECJ has tended to boost the influence of EU decision-makers," UniCredit economist Andreas Rees noted.

A verdict is expected before the end of the year.

But Draghi will hardly stop in his tracks with a verdict still pending. Economic recovery in the eurozone has been slow and the currency area has recently crossed the boundary into deflation.

That's why many economists believe the ECB Governing Council will announce the start of bond-buying under the OMT program as early as January 22, when it comes together for its next policy meeting. It might even do so against the will of the German Bundesbank.

In any case, the ECB hopes its program of buying up bonds will spur the economy and bring up inflation levels - even though the effectiveness of the channel from central bank bond-buying to stimulation of the real economy remains controversial.

The consequent large increases in investor cash chasing investible financial assets tends to drive asset prices up. That benefits those who held such assets prior to the bond-buying program. Their paper wealth increases.

However, inflation in financial asset prices resulting from flooding the secondary financial markets with "liquidity" does not necessarily translate into substantially more spending in the real economy or large increases in GDP.

The ECB's OMT program is modeled on a similar program that has been implemented by the US central bank, the Federal Reserve, during the past several years. The Fed's secondary-markets bond-buying program certainly was effective in inflating the prices of financial assets like stocks and bonds, but economists have argued with each other about the extent to which the gambit, often called "quantitative easing", helped increase activity in the real economy.

Insiders have said the ECB is currently looking into several strategies for making bond purchases. One possibility could be to mutualize only part of the risks attached to the program, meaning that further purchases could be left to national central banks. That could change the mind of the Bundesbank, and might also prompt Germany's Federal Constitutional Court to come up with a mild ruling - if there's a ruling at all, given that the ECB might present the court with a fait accompli.