Iraqi Kurds are slated to vote on an independent Kurdistan on September 25. Even though most are in favor of getting their own state, many are still considering to vote 'no' as Judit Neurink reports from Sulaimaniya. 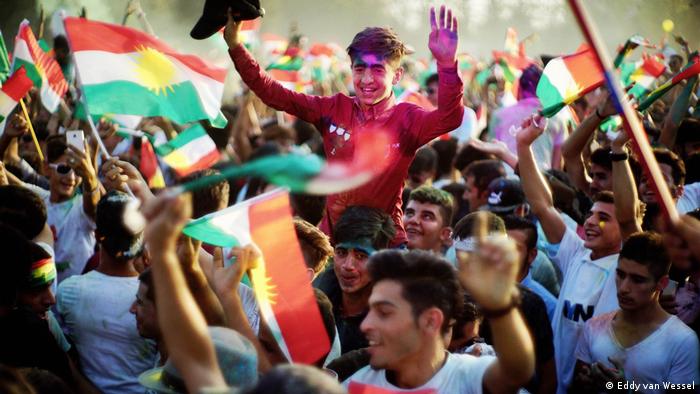 "It's hard to say 'no'," said 27-year-old Ali Faraj, a journalist working in Sulaimaniya, the second city of the Kurdistan region of Iraq.

Every Kurd wants an independent Kurdish state, he added - so, when they vote in today's referendum for independence, he said most Kurds will vote 'yes'.

But like many people here in Sulaimaniya, a bastion of opposition to Kurdish leader Masoud Barzani who initiated the poll, Faraj said he wants the referendum to be delayed.

"Perhaps even till 2019, so there's time to prepare it really well," he told DW.

Even though independence is his dream, too, Faraj says "it is too dangerous now."

He points to the poor state of the economy, which could influence the outcome of the poll, but also to negative reactions from Iraq and abroad: from neighboring Iran and Turkey, in particular, who have threatened to close the borders through which the Kurds in Iraq get most of their goods. 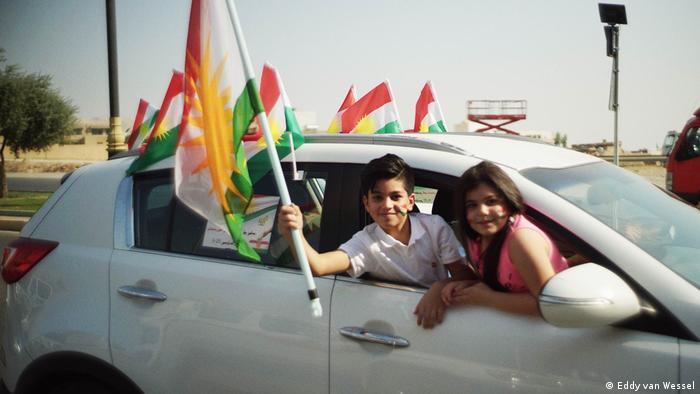 In Baghdad, where Prime Minister Haider al-Abadi has called the referendum about secession unconstitutional and talked about sending in the military. Last Monday, Iraq's top court ordered to suspend the independence referendum.

Already, Shiite militias (which are mainly supported by Iran) have acted in one of the areas claimed by both Baghdad and the Kurds by removing a Kurdish council and cancelling its decision for the area to be part of the referendum. The Kurdistan government wants to include most so-called disputed areas in the vote, especially the oil city of Kirkuk, where the Kurds form a small majority.

It's partly because of Kirkuk that Faraj wants the delay: he says the Kurdish majority is too small.

"If some of the Kurds there say 'no', we lose the city forever. The risk is too big," he said. Many Kurds call Kirkuk their Jerusalem and the capital of their future independent state.

In retaliation, Baghdad might stop airlines landing at Kurdish airports and close banks, he points out. "But people are more worried that the Shiite militias may attack us. Still, I expect the international community to stop them entering our cities."

But many Kurds do worry about it, says 69-year old Abdullah Sabir, a manager with an international aid organization in Sulaimaniya. "A hundred years of negotiations are better than a month of fighting," he said.

He was phoned by family members worrying about where they could flee if fighting started. "It's a concern. The borders will be closed, Baghdad will be dangerous. We will be trapped."

Independent, but worse off?

As many are worried about the possibility of Iran and Turkey closing their borders, people have started hoarding foodstuffs. A further complication is that all civil servants have only been paid part of their salaries for nearly two years, due to the recession, the war against the Islamic terror group IS, and low oil prices.

"What is a Kurdish state with an empty stomach?" Sabir asks. He says he will cast a 'no' vote. "I don't care who rules me, I just want a proper life."

The main drive behind the referendum is coming from the region's largest party, the Kurdistan Democratic Party (KDP), and its president Barzani. They recently embarked on a colorful 'yes' campaign in the Kurdistan capital Erbil and the region's third city, Duhok, with Kurdish flags everywhere and massive daily rallies with Barzani as the main speaker. 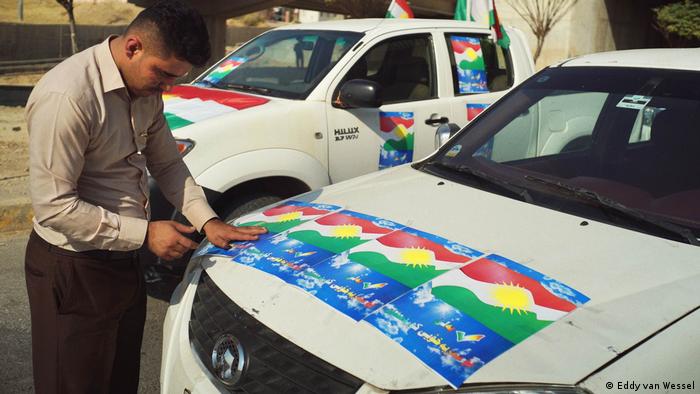 None of that bustle is visible in Sulaimaniya, where the KDP has little foothold. Just a few dozen cars with flags are preparing to stage a noisy drive through town in support of the 'yes' campaign.

At the same time, there's hardly any activity visible at the offices of the 'No4now' campaign just around the corner. Officially, this is not a 'no' campaign - voting against every Kurds' most cherished dream is just too sensitive.

Still, they expect a large majority in the Sulaimaniya region to vote 'no', dissatisfied as they are with the economic situation, with the state supplying just seven hours of electricity a day and water out of the tap every three days, which they blame on the KDP government that is pressing for a 'yes' vote.

Some had expected the referendum to be delayed. The US, Great Britain and the United Nations recently had offered Barzani an alternative: they will help to get negotiations with Baghdad back on track on the issues that led to the referendum plan in the first place - primarily Baghdad stopping its payments to the Kurds, arguments over the sharing of oil income, and the fate of the disputed areas. However, only days after the offer was made, the Election Council rejected it and confirmed that the vote was still on for September 25.

For 35-year-old Zorabi Ghazi, the fact that not even the political parties within the Kurdistan region agree on major policies is his main reason for voting 'no'. Two parties boycotted the recent session in the Kurdistan Parliament to legalize the referendum process - the first session in two years due to conflicts between the opposition and the KDP. In total, over a third of the MPs stayed away that day.

"We need cooperation between the parties. Only if all the parties were involved and in an alliance, would I vote 'yes'," Ghazi said, who works as English teacher and studies Diplomacy and International Relations.

"So for now, this is not a healthy referendum."

However, he still expects the majority of Iraqi Kurds to cast a 'yes' vote.

"Yet those who feel it's not the right thing will vote 'no', or put in a blank vote, to send a message. Even though all Kurds support independence, they still need to express their dissatisfaction about the lack of salaries, democracy and freedom of speech," Ghazi said.

As for Barzani, Faraj thinks the Kurdish president's driving force is mainly personal. "He wants to go down in the history books, even if only as the president who tried to bring the Kurds independence, but failed."

Iraqi Kurdish lawmakers have voted to move ahead with a controversial independence referendum. The vote comes amid international opposition and internal political disputes within Kurdish ranks. (16.09.2017)

Iraq's parliament has rejected a planned Kurdish independence vote. The September 25 vote threatens to reignite conflict between the Kurds and the central government. (12.09.2017)