Iraqi Christians from a town recently retaken from IS have held a Christmas Eve mass for the first time in two years. But with the frontline in the battle for Mosul nearby, few have returned to their homes. 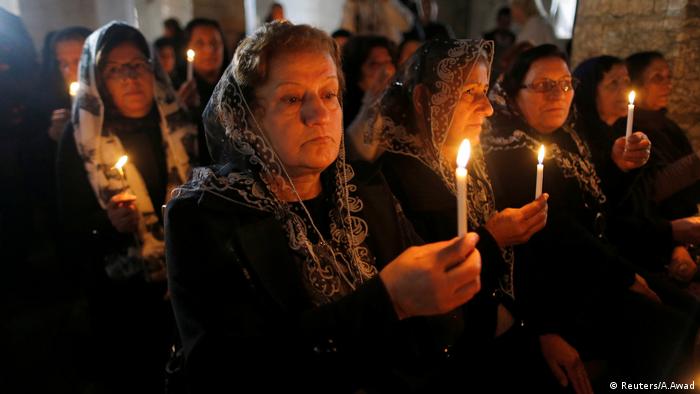 Iraqi Christians attended a Christmas Eve mass for the first time in two years in the northern town of Bartella, which was retaken from the self-declared "Islamic State" (IS) group two months ago.

The Assyrian Christians held the service at Mart Shmoni Church, its church bells ringing under heavy guard for fear of attack by IS militants. Church-goers sang and prayed in Syriac, the language of Jesus.

When IS swept into Nineveh province in the summer of 2014, they captured numerous towns and villages belonging to Iraq's ancient Christian community. The extremists gave them the choice to convert to Islam, pay a tax or face death. Many of the thousand-strong community in Bartella fled to the stability of the autonomous Kurdish region and its capital Erbil, home to a large Christian minority.

Iraq's elite counter terrorism forces and Kurdish peshmerga cleared Bartella and other villages as part of an offensive launched in October to retake the IS stronghold of Mosul, Iraq's second largest city. There, Iraqi security forces are facing stiff resistance from IS suicide vehicle bombs, snipers and booby traps.

The Mart Shmoni Church was badly damaged under IS rule, its crosses desecrated, statues of saints defaced and church bells taken down.  Large parts of the town have been reduced to rumble, and with the frontlines only 13 kilometers (8 miles) away, few residents have returned.

"This is a dark cloud over Iraq," Bishop Mussa Shemani told the assembly in his Christmas Eve sermon. "But we will stay here in our land no matter what happens. God is with us."

Iraq had about one million Christians before the 2003 US invasion that overthrew Saddam Hussein, sending the country into years of war and sectarian violence.  Many of the community have since fled to the West.

In neighboring Syria, IS has also pushed out Assyrian Christians and Armenians from ancient towns and villages in the northeast of the country.  Many have since been able to return to their homes as the US-backed Syrian Democratic Forces, composed largely of Kurdish fighters, retake territory from IS.

IS releases last of kidnapped Assyrian Christians after ransom payment

The last of nearly 250 Assyrian Christians kidnapped by the "Islamic State" in Syria have been released in exchange for millions of dollars in ransom money. The community is under threat across the Middle East. (22.02.2016)

The Bundeswehr will be helping to train the Iraqi army in Baghdad in 2017, as part of a NATO mission. Up until now, the military has confined itself to helping the Peshmerga Kurds in the north of the country. (23.12.2016)