Shiite cleric Moqtada al-Sadr's party has won the most seats, according to initial results. The elections experienced low turnout, particularly among youth. 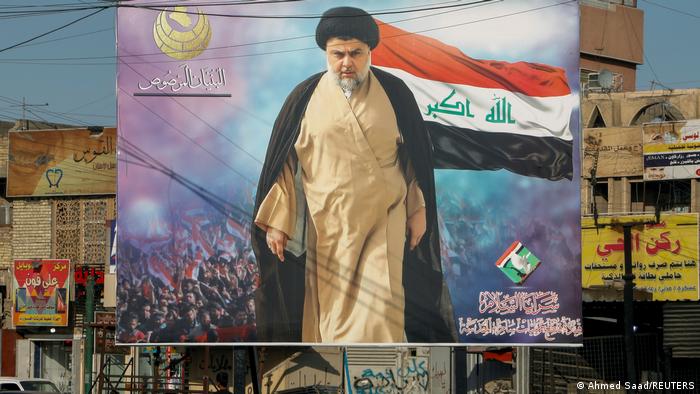 Moqtada al-Sadr has called for an "Islamic democracy" in Iraq

Populist Shiite cleric Moqtada al-Sadr's party took the most seats following parliamentary elections in Iraq, according to initial results and remarks from government officials on Monday.

A Sadrist official told AFP news agency that the party has won 73 seats out of 329 in total.

Few Iraqis headed to the polls on Sunday, as the country held its first parliamentary elections since a mass youth-led protest movement took the nation by storm in 2019.

The elections, which took place amid a widespread election boycott by anti-government activists, didn't generate much enthusiasm among Iraq's young population.

Only 41% of eligible voters cast their ballots, Iraq's electoral commission said Sunday night. The lowest turnout, somewhere between 31% and 34%, was in Baghdad, Iraq's capital.

The full election results will be released within the next 24 hours.

"We have succeeded in fulfilling our promise and our duty in securing fair elections," Al-Kadhimi wrote.

The comments drew scrutiny from critics, who said the low turnout reflected voters' lack of confidence in the current government's willingness to hold fair elections.

Out of Iraq's 40 million population, some 24.9 million were eligible to vote.

Only 41% of them voted, marking a record-low turnout — falling slightly lower than the 2018 elections, which recorded a turnout of 44.5%.

Iraqis head to the polls

Few expect change as a result of the elections

A local elections monitor recorded violations like breaches of voting secrecy, and said 41% of voters it observed were not asked to show official documentation.

The vote will decide who gets to sit in the 329-seat legislature.

Under Iraq's laws, the winner of Sunday's vote gets to choose the country's next premier tasked with forming a government. But negotiations for a premier are expected to drag on for longer.

The vote is being held under a new electoral law that aims to improve the chances of political independents winning seats.

Despite talk of reforms, many activists have called for a boycott after authorities carried out a bloody crackdown — as well as a string of targeted assassinations —  that saw over 600 people killed and thousands more injured in the span of a few months.

While Iraq is in desperate need of change to tackle security and economic challenges, few of the nation's largely young population expect it to happen as a result of the elections.

Muna Hussein, a 22-year-old cinematic makeup artist, told AP news agency she boycotted the election over security concerns, adding that she did not feel safe being around "uncontrolled weapons everywhere," a reference to militias backed by neighboring Iran.

"In my opinion, it isn't easy to hold free and fair elections under the current circumstances,'' she said.

The elections, held amid tight security, saw over 250,000 security personnel deployed to secure over 8,500 polling stations spread across the country.

The Fatah Alliance is comprised of parties affiliated with mostly pro-Iran Shiite militias that rose to prominence during the war against the Sunni self-proclaimed Islamic State (Daesh) terror group.

Al-Sadr is also close to Iran, but publicly rejects its political influence over Iraq.

The elections are the country's second after defeating the Islamic State.