Officials have said that faulty oxygen containers exploded in the intensive care unit of a hospital treating coronavirus patients. The accident has been blamed on mismanagement and corruption. 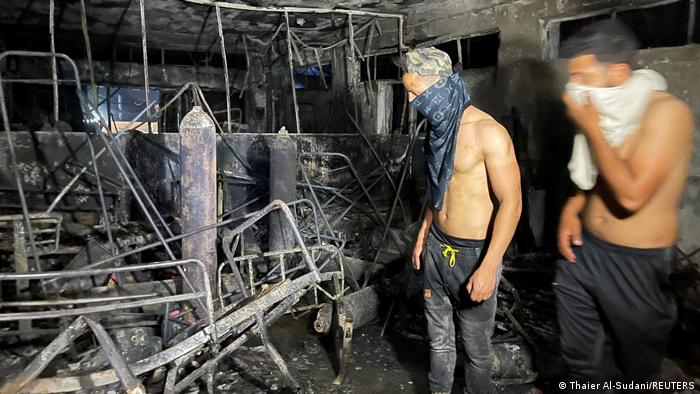 At least 82 people were killed, and 110 more injured, when a fire tore through the coronavirus unit of a hospital in the Iraqi capital of Baghdad, Iraq's Interior Ministry said on Sunday

At least 28 of those who perished at Ibn al-Khatib hospital were on ventilators battling COVID-19, according to the semi-official, independent Human Rights Commission.

The government blamed negligence from hospital authorities for the fire, which was initially sparked by an oxygen tank explosion.

"The majority of the victims died because they had to be moved and were taken off ventilators, while the others were suffocated by the smoke," a civil defense official told AFP news agency.

A hospital worker also told AFP that the fire broke out in the middle of the night as dozens of relatives were at the bedsides of COVID patients, and the flames spread across multiple floors.

One witness described people jumping out of windows to escape.

"The fire spread, like fuel ... I took my brother out to the street, next to the checkpoint. Then I came [back] and went up from there. To the last floor, that did not burn. I found a girl suffocating, about 19 years old, she was suffocating, she was about to die," Ahmed Zaki told Reuters news agency. He had been visiting his brother in hospital.

"I took her on my shoulders and I ran down. People were jumping... Doctors fell on the cars. Everyone was jumping. And I kept going up from there, got people and come down again," Zaki said.

At least 200 people were rescued from the fire, the Health Ministry said. 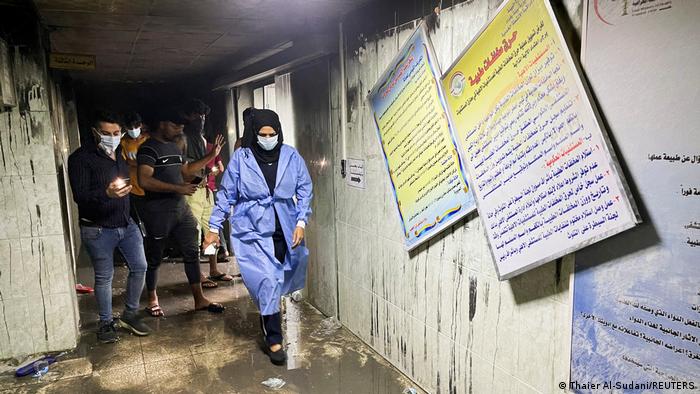 Hospital staff inspect the corridors after the fire

Shortly after the blaze, Iraqi Prime Minister Mustafa Al-Kadhimi fired key health officials, including the director-general of the Baghdad Health Department in the al-Rusafa area, where the hospital is located, and the director of Ibh al-Khatib Hospital and its director of engineering and maintenance.

"Negligence in such matters is not a mistake, but a crime for which all negligent parties must bear responsibility," he said.

He ordered an immediate investigation into the incident.

Health Minister Hassan al-Tamimi was suspended and was facing calls to be sacked.

President Barham Saleh posted on Twitter, saying: "The tragedy at Ibn al-Khatib is the result of years of erosion of state institutions by corruption and mismanagement." 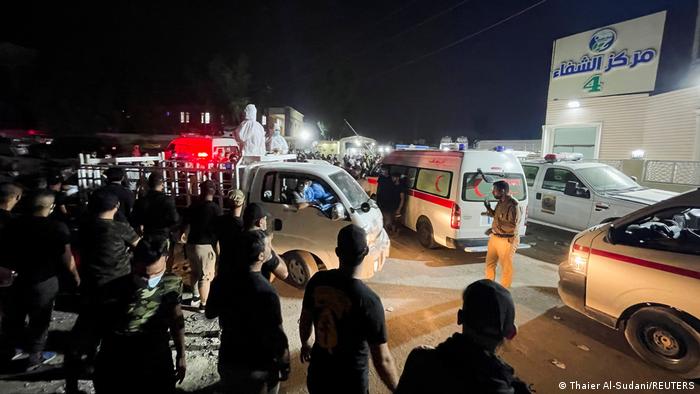 People and ambulances gather outside the hospital

Iraq accounts for the highest number of coronavirus infections in the Arab world, with a total of 1,025,288 registered cases since the start of the pandemic in February 2020.

The hospitals in the country are crumbling following decades of conflict and poor investment, with many reporting a scarcity of medicines and beds.

Ibn al-Khatib hospital is reserved for the most severe COVID cases in Baghdad.