Followers of Shiite cleric Muqtada al-Sadr are demanding that the judiciary dissolve parliament. Iraq has seen a political crisis between rival Shiite factions since the 2021 elections yielded no absolute majority. 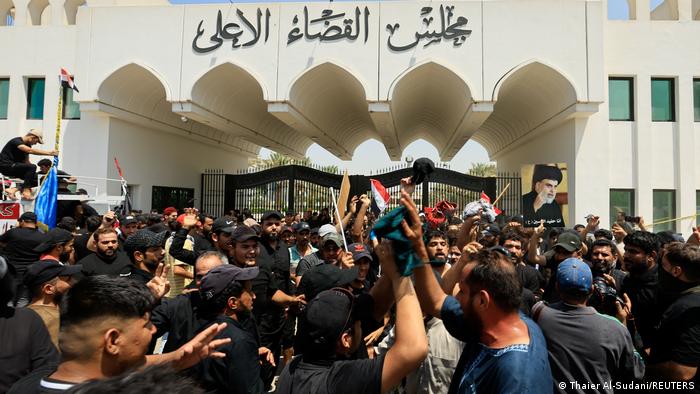 The Supreme Judicial Council and Federal Supreme Court said in a statement that they had suspended work after receiving "threats over the phone."

The cleric's supporters, known as Sadrists, demanded that the judiciary dissolve parliament. They have already been camped outside parliament for the past three weeks.

Last week, al-Sadr gave the country's judiciary a week to dissolve parliament. The judiciary responded that it has no authority to do so.

What were the reactions to the sit-in?

Amid the unrest, caretaker Prime Minister Mustafa Al-Kadhimi returned home early from a visit to Egypt, where he had been due to take part in a five-country summit.

Kadhimi's office said that the prime minister "called on all political parties to calm down and to take advantage of the opportunity for national dialogue to get the country out of its current crisis."

The UN mission in Iraq said it respected the right to "peaceful protest," but urged "respect for state institutions."

Rival Shiite coalition Coordination Framework said it would "refuse any call for direct dialogue" until the Sadrists put an end to "the occupation of institutions." 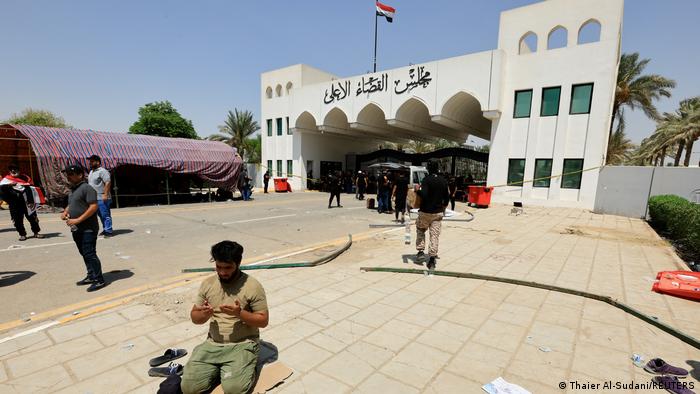 Who are the Sadrists and what do they want?

Muqtada al-Sadr is an influential cleric and onetime battlefield enemy of US forces in Iraq. He has millions of supporters and is one of the main powerbrokers in the country.

Al-Sadr's bloc emerged as the largest faction in Iraq's parliament following the elections in October but did not attain an absolute majority. He had positioned himself as an anti-establishment figure in his campaign, criticizing corruption and mismanagement, as well as Iran's involvement in Iraqi politics.

The Sadrists insist that the constitution be amended so that the bloc may nominate the prime minister.

The 73 lawmakers in al-Sadr's bloc resigned from parliament in June after months of political deadlock.

The rival Coordination Framework faction, which includes parties backed by Tehran, wants a transitional government before new elections are held.