Iranian Leader Asks German Chancellor for Help with Zionism | Germany | News and in-depth reporting from Berlin and beyond | DW | 20.07.2006

Two months after sending US President Bush a letter, Mahmoud Ahmadinejad has written Angela Merkel a letter requesting aid in solving the Palestinian problem and dealing with Zionism. 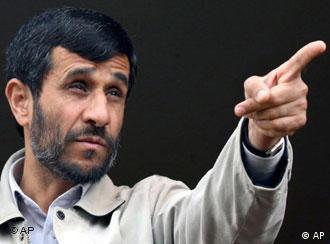 Mahmoud Ahmadinejad is notorious for his firebrand speeches

The Iranian news agency IRNA said the message had been handed to the German charge d'affaires in Tehran by Foreign Minister Manouchehr Mottaki, who visited Berlin in June.

German officials confirmed the receipt of the letter but until late Thursday declined to comment on the contents.

"There's nothing about the nuclear issue (in the letter)," a German government official told Reuters on condition of anonymity.

"It's all related to Germany and how we have to find a solution to the Palestinian problems and Zionism and so on. It's rather weird," said the official who saw the letter on Thursday.

Zionism is a political movement that supports a homeland for the Jewish people in Palestine, and lead to the establishment of the state of Israel.

The letter comes at a time when Germany's relations with Iran have become more tense after Ahmadinejad's repeated denial of the Holocaust. Again this week, he made comments questioning whether the Holocaust was being used as a tool by the West to dominate the Middle East. 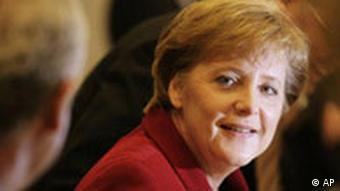 The government is contemplating a response

The German official who read the letter said it was an "extremely touchy" subject, and added that the government did not yet know if or how it would respond. "There are a lot of propaganda phrases about Israel and the Jews in it."

Holocaust denial is a crime in Germany punishable with up to five years in prison.

Less confrontational than US letter

In May, Ahmadinejad wrote US President George W. Bush an 18-page letter discussing religious values, history and international relations. The Iranian leader, who minces no words in his distrust of the West, took swipes at Israel and the US.

He lashed out at the US-led invasion of Afghanistan and Iraq, abuses of detainees in Guantanamo Bay and Washington's staunch support for Israel. He even admonished Bush, a born-again Christian, to be be more pious, saying that his actions were inconsistent with Christian teachings.

In contrast, the letter to Merkel was different in tone -- "not so confrontational," the official said.

"It's not negative like Ahmadinejad's letter to Bush. He is not criticising Germany," he told Reuters. "It's basically about how we have to work together and solve the problems of the world together."

No mention of nuclear standoff

The German official said it was interesting that the letter did not discuss Iran's nuclear standoff with the United States, European Union and other countries. Iran is facing possible action at the UN Security Council over suspicions that it is developing nuclear weapons under the cloak of its energy program. Tehran denies the charge, saying it is working on developing nuclear fuel to run power stations.

Germany, one of Iran's largest trading partners, has been working with the five permanent members of the United Nations Security Council -- Britain, China, France, Russia and the United States -- to try to convince Tehran to abandon uranium enrichment, considered the first step to nuclear armament. They have developed a package of incentives to induce Iran to abandon its program. Iran is expected to respond by mid-August.

Iran Open to Nuclear Talks But Will Not Discuss Technology

Foreign ministers of the Group of Eight countries are holding talks in Moscow Thursday that are expected to raise pressure on Iran over its nuclear program. (June 8, 2006)

Foreign ministers of the Group of Eight countries are holding talks in Moscow Thursday that are expected to raise pressure on Iran over its nuclear program. (June 29, 2006)

Germany told Iran on Wednesday that it must halt enrichment work under an incentive package to end its nuclear dispute with the West. It said the West would be ready to negotiate on other terms of the offer. (June 8, 2006)