Reformist candidate Eshaq Jahangiri, a deputy to President Hassan Rouhani, has dropped out of Iran's presidential election days before the vote. The widely expected move was likely to boost support for the incumbent. 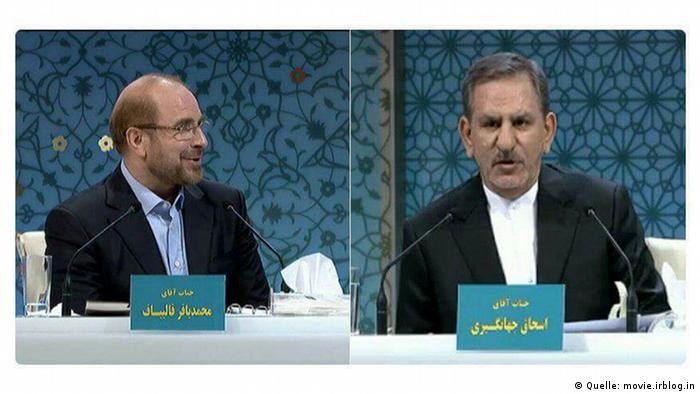 Several Iranian news agencies reported Tuesday that Jahangiri (pictured right), who serves as senior vice president under Rouhani, had quit the race for the presidency. Voters will now have four candidates to choose from on Friday May 19.

"I have completed my historic duty and, together with you, I will vote for Rouhani to help continue on the path to progress for this country," Jahangiri said as he announced he was withdrawing his candidacy to a crowd of several thousand people gathered in the southern city of Shiraz, according to news agency ISNA, quoted by AFP.

"I ran as candidate to make the voice of reformists heard," he said.

Jahangiri's withdrawal was widely expected, as he was thought to have entered the race strategically to back up Rouhani in pre-election debates and also potentially to ease concerns among the incumbent's allies that Rouhani might be disqualified by the Guardian Council, which vets candidates. Former President Mahmoud Ahmadinejad's renewed candidacy was denied by this body.

With the two other remaining candidates not expected to gain a significant share of the votes, election watchers see Jahangiri's resignation as paving the way for a showdown between the pragmatist Rouhani and Ebrahim Raisi, a hard-liner believed to be the favorite of the country's Supreme Leader Ayatollah Ali Khamenei.

Read more: Iran: Who are the presidential candidates?

First elected president in 2013, Rouhani sought to improve civil liberties and rebuild ties with the West. His government signed a 2015 deal with six world powers which ended some international sanctions against the Islamic Republic in return for curbs to its nuclear program. However, many Iranians are yet to benefit from that deal and economic stagnation continues to plague the country. This has provided ammunition for Rouhani's conservative challengers as he runs for a second term.

Raisi and his allies have accused the president of failing to support the poor. Raisi, current head of the influential organization which protects the Imam Reza shrine, was a member of a panel which sentenced thousands of political prisoners to rapid execution during the 1980s.

The car of the Iranian president has been attacked by an angry crowd as he visited a site where at least 35 miners were killed in a blast. The incident comes ahead of a presidential election in almost two weeks' time. (07.05.2017)

On May 19, Iranians will elect their next president. Once again, it will be a man. In an interview with DW, women's rights activist Mahboubeh Abbasgholizadeh says this has to change. (17.04.2017)