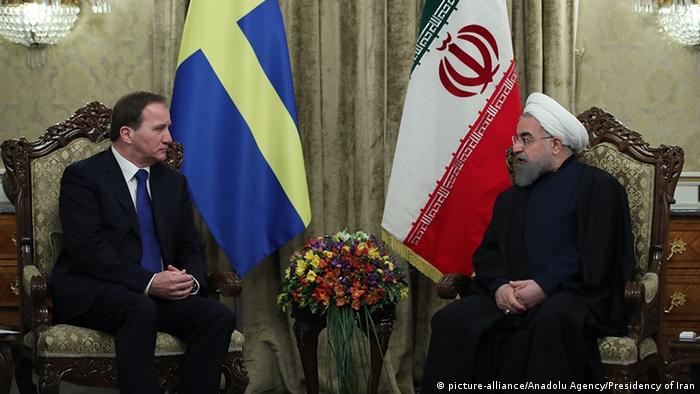 Swedish Prime Minister Stefan Lofven was in the Iranian capital on Saturday to take part in talks addressing "economic relations and important regional problems," he said.

Lofven's visit was greeted with praise from Iran's supreme leader, Ayatollah Ali Khamenei, who hailed the positive relationship between the two countries during a meeting with the Swedish premier in Tehran.

"America and many European powers have played a role in causing traumatic events in Syria and Iraq, and the people of the region are aware of this interference and are rightly skeptical," Khamenei was quoted as saying by Iranian television.

"Due to its long relationship with Iran, Sweden is a country with a good reputation in the eyes of our people, and the optimism of nations towards each other will be fertile ground for developing cooperation," the supreme leader said.

The Swedish prime minister also met with Iranian President Hassan Rouhani (pictured above), who hailed the "moderation" in Sweden's foreign policy, including the government's support of the nuclear deal reached between Tehran and several Western powers in 2015.

Rouhani said on Twitter that the two countries were determined to improve economic ties.

In addition to economic matters, Lofven was also in Iran to discuss cooperation on various other issues, including science and technology, higher education and research.

Neutral Sweden has generally had good relations with Iran. Tehran has long been considered an arch-enemy of the US, whose foreign policy Sweden has often criticized.

The EU has welcomed Iran's decision to suspend a sentence of death by stoning for a woman charged with adultery. In Sweden, the Iranian ambassador was summoned to Stockholm to assert the government's concerns. (09.09.2010)

European Union calls on Tehran to return to negotiating table

At a meeting in Stockholm, EU foreign ministers renewed their call for Iran to return to international negotiations over its nuclear program - and said new sanctions would come if it continued its defiance. (04.09.2009)