Negotiators have agreed to reconvene in Moscow next month for another round of talks on Iran's contentious nuclear program. The difficult talks faltered over issues like uranium enrichment and sanctions. 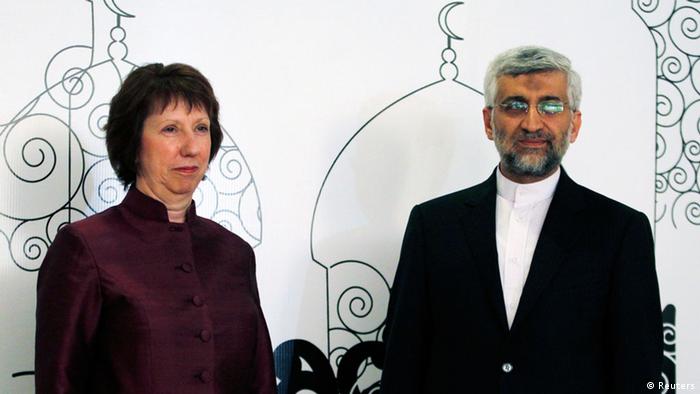 Two sensitive days of diplomacy in Baghdad ended Thursday with a pledge of further negotiations in Russia on June 18 and 19.

EU foreign policy coordinator Catherine Ashton told reporters after the talks that both Iran and international mediators wanted to make progress, even though divisions endured.

"We remain determined to resolve this issue in the near term and through negotiations and we will continue to make every effort to that end," she said, speaking on behalf of the "P5+1" - the United States, Russia, China, France, England and Germany.

Ashton said that the sensitive issue of high-grade Iranian uranium enrichment, which Western powers say is suited not to atomic energy production but rather the production of nuclear weapons, was one where gradual progress might be made.

"Iran declared its readiness to address the issue of 20-percent enrichment and came with its own five-point plan, including their assertion that we recognize their right to enrichment," she said.

Iran's chief nuclear negotiator, Saeed Jalili, did not addresss the issue of 20-percent enrichment directly after the talks, instead alluding to Iran's more general right to enrich the radioactive element that can be used both for power-generation and bomb-making.

"Among the main topics in using peaceful nuclear energy is the topic of having the nuclear fuel cycle and enrichment. We emphasize this right," Jalili said. "This is an undeniable right of the Iranian nation … especially the right to enrich uranium."

Several countries, most notably Israel and the US, believe Iran is seeking nuclear weapons, while officials in Tehran say their enrichment program only aims to generate atomic energy.

Another stumbling point in the talks was the question of which side should first offer concessions. The government in Tehran wants international sanctions against it to be loosened or lifted before it begins dismantling its nuclear program, while Western countries want Iran to make the first step.

For the moment, however, Catherine Ashton said that all sides would "go back to our respective capitals and consult."