IOM: 'transit countries have a role to play in migration'

Over one hundred people said to be Ethiopians have been intercepted and questioned by Zambian authorities.The alleged migrants were apprehended as thousands of people make the risky journey to Europe seeking asylum. 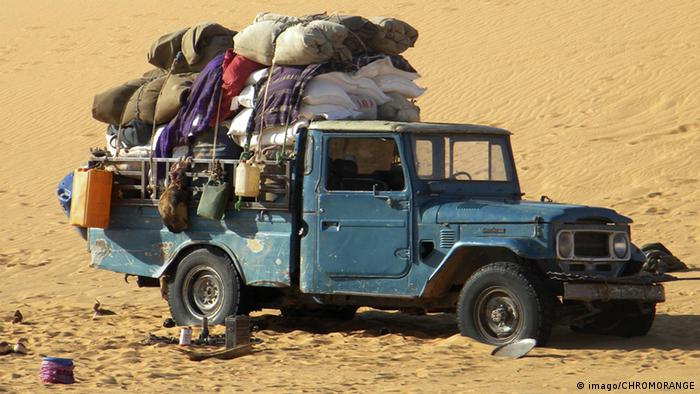 Police in Zambia intercepted a truck carrying more than a hundred people, believed to be Ethiopians trying to get to South Africa. The incident is being seen as a possible case of human trafficking. To find out more, DW spoke to Richard Ots, Chief of Mission for the International Office for Migration (IOM) in southern Africa.

DW: Mr Ots, we hear that the people in the truck did not have any identification with them. What are the Zambian authorities going to do with them?

Richard Ots: The Zambian immigration authorities are currently investigating the case, they are questioning the Ethiopians to see what their motives are and what the destination is and how they got into the country to begin with. Based on the findings, they will assess what can be done to return these people to their place of origin, if appropriate, or what other options there are such as resettlement. It will really depend on what the profile of these people is and what their motive is for travelling.

Are these people victims of human trafficking or are they are just Ethiopians fleeing their country?

It is very hard to say. I think it's better to wait and see what comes out of the investigation. It's quite possible that people are being trafficked but we must say that a lot of people are also smuggled across the border rather than trafficked and I think it is important to make a distinction between the two. We do find that a lot of Ethiopians voluntarily engage smugglers to facilitate the trip but it is often difficult to really determine to what extent it is voluntary or to what extent they are being deceived and would be subject to exploitation upon arrival.

These people crossed more than two countries without being noticed by any border officials. What does this tell us about cross border authorities in these countries?

I think this is a good point. We often see that, not just in the Horn of Africa or along the eastern coast. I think that is something of a world phenomenon where countries that are basically transit countries along the migration route may not be vigilant when it comes to checking for people that are being smuggled across the borders. Because if they feel that people are not staying in the country anyway they will prefer not to deal with the hassle and just let them pass through. We think it is great that the government of Zambia has intercepted this truck and that they are dealing with the issue as it should be, but clearly much more has to be done in order to address this issue by all countries along the migration route, not just along the eastern coast of Africa but worldwide. I think it is important to realize that transit countries have a role to play in fighting trafficking and smuggling as much as the countries of origin and countries of destination do.

How big is the number of migrants in South Africa and where do the majority of them come from?

It's a bit difficult to say because many people evade detection and registration which is one of the reasons we advocate for legal alternatives to illegal migration. If you, as a country, try to keep migrants out, it is almost impossible - especially with a country with long, porous borders such as South Africa but also many other countries along the eastern migration route. Migrants will continue to come as long as they are motivated to travel to South Africa. We have had a lot of estimates of how many migrants are in South Africa, ranging from two million to five million. It is very difficult to get a reliable estimate of migrants in the country.

Of those who follow the legal procedure, what reasons do they give for leaving their countries?

In many cases, taking the example of Ethiopians, it is poverty. I think it goes without saying that if the people feel the difference in income levels between two countries, they will try to seek opportunities in the country that is perceived to be offering better economic opportunities and that is exactly what is happening. There are other reasons as well, people obviously flee conflict and in many cases they would claim asylum and try to be recognized as refugees. People also come for education opportunities, family reunification - there could be a host of reasons why people come to South Africa.

A small arrivals hall at Munich's central train station became the scene of a huge improvised relief effort as more than 2,000 migrants arrived in the Bavarian capital in a single day. Ben Knight reports. (02.09.2015)