The FBI says it is treating the fatal shooting of 11 people during a baby-naming ceremony as a hate crime. Pittsburgh's mayor said it was the darkest day of the city's history, and he called for gun law reform. 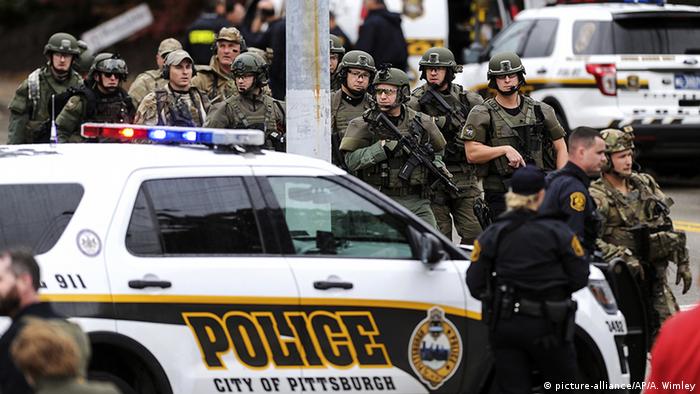 The man who stormed a synagogue in the US city of Pittsburgh , killing 11 people, made extreme anti-Semitic statements before launching his mass shooting, officials said on Sunday.

"During the course of his deadly assault on the people of the synagogue, [Robert] Bowers made statements regarding genocide and his desire to kill Jewish people," Scott Brady, US Attorney for the Western District of Pennsylvania, told a news conference.

Investigators said they didn't know why Bowers had specifically targeted The Tree of Life synagogue in a mainly Jewish area of Pittsburgh, adding that they have no evidence to believe he had accomplices.

Read more: Opinion: The Pittsburgh synagogue attack is a wake-up call for Europe

Earlier, in their arrest affidavit, police said Bowers told officers that Jews were "committing genocide to his people" and he wanted them all to die.

Allegheny County medical examiner Karl Williams said that many shots were fired during the assault and that forensics teams had found gun casings everywhere. Investigators said six people were injured, including four police officers. The victims were found in three different locations within the synagogue.

Bowers arrested shortly after his attack, during which he was shot by members of a tactical police unit. He is being treated in hospital for gunshot wounds. The 48-year-old has been charged with murder, is facing 29 criminal counts, and could face the death penalty.

The suspect is to make an initial court appearance on Monday, Brady said.

Officials released the names of the victims, describing them as middle-aged or elderly worshippers. The victims included two brothers and a husband and wife.

Pittsburgh Mayor Bill Peduto called the shooting the "darkest day of Pittsburgh's history," and demanded an urgent reform of US gun laws.

"I think the approach that we need to be looking at is how we take the guns, which is the common denominator of every mass shooting in America, out of the hands of those that are looking to express hatred through murder," he told reporters.

Trump called the shooting an act of pure evil and called on Americans to rise above hatred.

German Chancellor Angela Merkel's spokesman quoted her on Twitter as saying: "I am mourning the people who died in Pittsburgh, who obviously fell victim to blind anti-Semitic hatred."

"I offer my condolences to the families and wish those injured strength and recovery. Everyone, everywhere must oppose anti-Semitism with resolve," Merkel added.

Pope Francis led prayers for Pittsburgh on Sunday in St Peter's Square, telling his followers that "all of us are wounded by this inhuman act of violence."

Investigators have arrested a man in Florida in connection with pipe bombs sent to Democrats and Trump critics. Authorities warned that there may be more devices in the mail system than the 13 found so far. (26.10.2018)

US officials have intercepted several suspected pipe bombs set to be delivered to top Democratic leaders across the country, including to Barack Obama and Hillary Clinton. CNN'S New York office was also evacuated. (24.10.2018)