A Belgian author spent years staying in prisons around the world, encountering petty thieves, conmen and airplane hijackers. He says providing inmates with a decent standard of care is important for society as a whole. 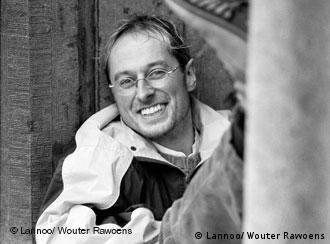 Jan de Cock traveled around the globe for years, sharing cells for weeks on end with musicians and actors, murderers and mothers who had stolen food for their children. He lived alongside rats, fleas and locusts, all the time keeping a diary of his experiences. De Cock recorded them all in his book "Hotel Prison," which has been published in the Flemish original, Dutch and German, and is soon to be published in French and English.

Deutsche Welle: You seem to have an incredible passion for the fate and welfare of prisoners. Where does this come from?

Jan de Cock: It all started way back in Chile where I used to work with school kids. When a lot of them ended up in prison, I was asked to set up the workshops in the prison. To me, it was the discovery of a complete new world. The whole idea of intimidation, aggression and filthy places was confirmed. But at the same time, I discovered a whole set of values shared by these people behind bars like patience, generosity and trust. I said the world has to know about this as well.

Most people dream about getting out of prisons, but you dreamt about getting in. How did you manage to get into prisons without committing a crime?

I think I have been in 138 prisons and it's not that easy to get a ticket for a jail. I started writing to a lot of embassies, consulates and organizations that work in prisons. The other way was my many contacts with ex-prisoners. Some of them had an uncle who worked as a guard in a prison or another one had a neighbor who was a chaplain. And in some countries I had to be creative.

Well like in China, I walked over to Tiananmen Square with a bunch of flowers and I gave flowers to the soldiers. I showed them a little piece of paper that said in Chinese "Peace and Freedom." Now that's enough to be arrested.

How did the authorities react to your request to go inside a prison?

I got a lot of answers that said: "you really want to live the life with these prisoners? You must be nuts!" But some of them were quite interested and said you'd be most welcome because we have interesting projects and there are nice programs on rehabilitation.

What about the prisoners themselves -- did you have to work hard to gain their acceptance?

In the beginning they were hesitant. But in most cases, and that's why I'm still so touched by the generosity of them, they very soon deposit their confidence in you. 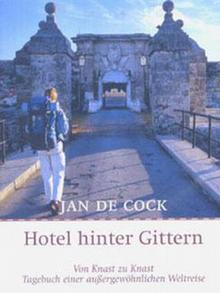 De Cock's book has been published in several languages

Of course, when you share these conditions with them there is something that goes far beyond words. And I had a guilty conscience that after a couple of weeks or days, I had to leave the cell.

There's a chapter in your book where you visited Turkey, and its called Turkish fruit and Turkish hunger, because when you arrived 20 inmates were on hunger strike. How did you find the conditions in Turkish prisons?

I was in one prison in Istanbul and the conditions were just terrible, particularly with those people who were on hunger strike. It's maybe not just about the conditions, but about the indifference of the authorities and maybe that's worse than having to deal with the lack of food or bad toilets. The indifference and the loneliness of so many people -- that's something that struck me on the world tour, people in prisons are often a forgotten group.

What would be the first thing that you personally would do to improve the conditions of jails in Turkey?

I think it's something that is valid for countries all around the world. I think we have to raise awareness in the community. The point is what it means for every person in society. I think if we believe that prisoners are part of our society, then we really have to take care of them. That means to focus on two important things: education and healthcare. People in prison should have the same rights as other citizens.

I don't want to be blind against the crimes they have committed and I am a big defender of justice. If we understand imprisonment as a way to pay for the crime you have committed, then that doesn't mean we should forget about other rights, like food, healthcare and education. Fortunately, I came across a lot of prisons where they work with that vision.

You shared cells with all types of people. Were you never scared?

I think fear is just the opposite of trust and confidence, and it is still my idea about life that in every person there is something good. I think that conviction has encouraged me a lot. Even when you go into the prisons, and some of them are hell, I'm not going to say that I didn't have to deal with difficult situations.

If you manage to go through that, then you reach the heart of every human being and thus of every prisoner as well. That's how I started to discover so many beautiful things in them. It's amazing how they are able to create beautiful things to survive. A few weeks ago, in one of the cells in Antwerp where I work in the prison, there was a Russia guy and he made models of little churches out of his toothpaste. Amazing.

You mention the issue of trust. How important is it for prisoners to build up a relationship of trust with their cellmates and how did you experience this?

A problem in many prison systems is the lack of trust. Then you see when authorities deposit confidence in these inmates, all of a sudden a whole world is opened. It reminds me of one guy who was addicted to robbery, particularly of the handbags of elderly ladies.

For the last two years, he has been doing voluntary work in a home for elderly people -- and as far as now, no handbag has disappeared! But the amazing thing is that a while ago, he was asked by the director of the home to feed one of the elderly ladies who wasn't able to come to the dinner hall. As he walked into her room, he started to cry because he said it was the first time in all these years that someone had deposited that amount of trust in him. It made a click.

Would you recommend people to go and stay in a prison?

It depends on what your goal is. After 15 years of working with prisoners, I slept for the first time in a prison. And ever since then, it has been different. So if we want to understand inmates a bit better, or if we really want to reach the soul of prisoners, it is good to live with them. Maybe that is the major breakthrough in my life. It's not just a question of taking care of prisoners and believing they have another opportunity, but it is also allowing them to make a difference in your life.

You have your book, a new prison project, you're continuing to visit prisons around the world and give lectures on the topic and you have your Web site www.prisoninfo.org. What is the main objective you are hoping to achieve with everything?

The two main goals of our foundation are to raise funding to improve the condition of prisons worldwide and to raise awareness amongst us all. Personally I would say if we don't take care of prisoners, just like taking care of street kids and refugees and the sick, we miss an opportunity to become happier.