Internet use in China on the rise

Over 700 million people in China are now online, as the government pushes its internet growth plan. But all is not gold that glitters - many Chinese are still offline and censorship remains a reality. 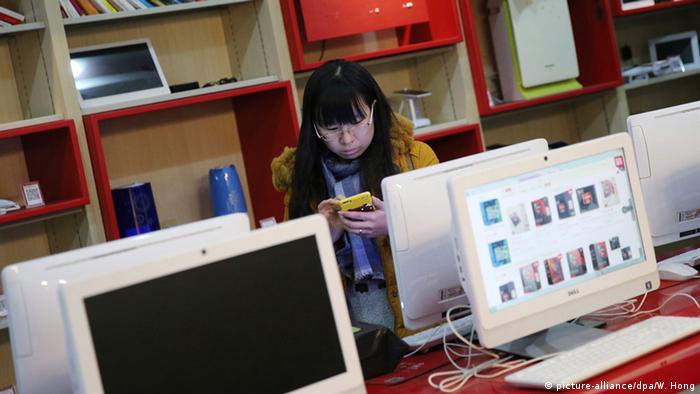 The number of internet users in China had further increased, authorities reported on Wednesday - while many Chinese remained offline.

710 million people had accessed the web at least once over the past six months, which was 3.1 percent more than in December, government agency CNNIC said in a statement.

Already before the latest increase, China had the largest web community worldwide in absolute terms, exceeding the number of German internet users by around 10 times.

But almost half the Chinese population did still not use the internet, while almost nine out of 10 Germans surf the web.

Especially in rural areas there were only few users, accounting for under a third of the total.

China's government launched a growth plan dubbed Internet Plus last year in a bid to fuel the economy by fostering new links between online technology and business.

But China's ruling communist party also keeps a firm grip on what information becomes available and censors websites that could undermine its authority, which has repeatedly alarmed free speech advocates.

China's most senior internet regulator has stepped down, his replacement set to maintain course. Lu Wei headed the party's attempts to decide what ordinary Chinese can and cannot read during his three-year tenure. (29.06.2016)

Chinese officials ordered some of the country's biggest companies — including Alibaba, Tencent and Baiidu — to pay fines for failing to report corporate acquisitions over the past eight years.

New regulations in China will mean under-18s will only be allowed to play games online for three hours a week. Authorities have expressed concern over gaming’s impact on society.