″Internal Corruption Remains a Problem in the European Union″ | Europe| News and current affairs from around the continent | DW | 30.03.2007

Dutch MEP and former assistant auditor of the Financial Control Directorate Paul van Buitenen was the whistleblower who brought down the EU Commission in 1999. He talked to DW-WORLD.DE about current corruption in the EU. 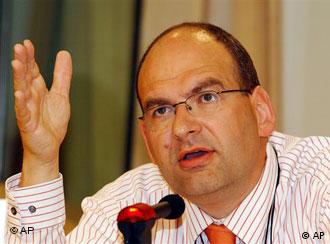 Paul van Buitenen, a Dutch MEP in the European Parliament and former assistant auditor of the Financial Control Directorate, believes that the fight against corruption in Europe has made little progress since new initiatives were set up in the wake of the EU's biggest scandal which brought down the Commission in 1999.

DW-WORLD: Is there structural corruption in the EU?

Paul van Buitenen: The European Anti-Fraud Office (OLAF) has had success in combating external corruption in the member states, but it is in the internal cases where it has found problems. Working with the EU authorities makes it very difficult to proceed in an investigation. Officially, OLAF is an independent body, but it functions within the EU Commission; in the commission building, on the commission's computer network and works with commission investigators. OLAF's independence exists only on paper.

Which of the EU organizations are especially susceptible to corruption?

OLAF has investigated the European Commission for Regional Policy and has confirmed through investigation that corruption has taken place there over a number of years. The commission works with local and municipal bodies in the member states and encourages them engage with Brussels. However, no important decisions are made on the recommendation of the committee so once could basically abolish the organization completely and save the EU some 70 million euros ($93.4 million). Plus, some members have been shown to have unexplained extra salaries and OLAF has discovered a number of discrepancies in reports. Every time the committee is approached about corruption, it promises to improve the situation. But then a new case arises.

How is the situation in the EU parliament?

There is corruption, but these are special cases. There are always conflicts of interests everywhere. If someone sits on the supervisory board of a big automobile company, that person should not write in the European Parliament guidelines on subjects like fuel or manufacture. But I do not go around the building with a camera to see what my colleagues do. I concentrate on the big deception cases and irregularities with European implications.

Which new measures would be necessary to fight against corruption?

In some states, like Germany or Holland, controlling possibilities already exist; there are independent judicial authorities and a strong parliament. At a European level, however, there is not a democracy, but a bureaucracy. We must decide if we are to continue with the European arrangement. If we do, then we must also create these democratic structures at European level. Otherwise we should revert to allowing the national authorities and parliaments to take over the controlling functions again. But at the moment, as it stands, everything goes wrong.

When you uncovered the EU Commission scandal in 1999 which brought down the commission, you were punished. Has the situation changed?

I would say: Things have got even worse. There is now a regulation which supposedly protects so-called whistleblowers which makes officials believe that they can uncover scandals. But in reality, if one does this, they are destroyed. So the regulation does not work. If a committee official, like in the 1999 case, is suspected of corruption, he is moved to another department at the beginning of the inquiries so he can no longer carry out those activities -- but he continues to be employed and still gets his salary. But if people like me sound the alarm, we are suspended and sometimes have our salary halved. Something is not right here.

Three Italian nationals have been charged and are being held in custody in Brussels as part of a corruption probe into tenders awarded by the European Commission. (28.03.2007)

A widening match-fixing scandal and revelation of politicians' corporate salaries have sullied Germany's once clean image. Experts say the country has been slow to tackle corruption and are calling for tougher laws. (15.02.2005)

Germany is facing yet another corruption scandal. After a spectacular Munich soccer stadium bribery affair, news that rail company Deutsche Bahn is under investigation is adding to the country's tarnished reputation. (16.03.2004)