Serie A has ordered the club to play two matches behind closed doors after Kalidou Koulibaly was racially abused. Napoli's coach has threatened to lead his team off the field if a similar incident occurs in future. 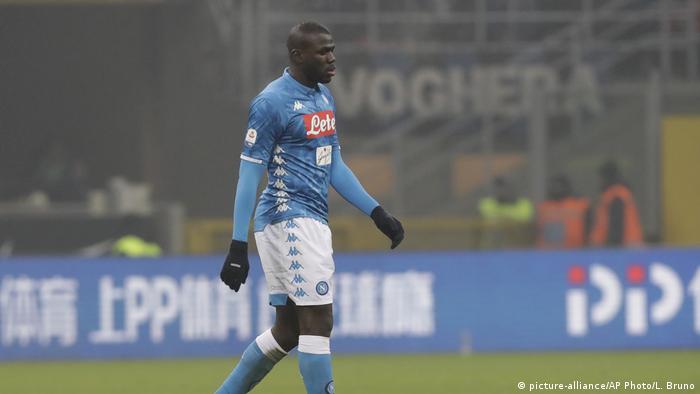 Italy's top football league has ordered Inter Milan to play their next two home games behind closed doors after some of the club's supporters racially insulted Napoli defender Kalidou Koulibaly during Wednesday's Serie A match at San Siro.

Serie A's disciplinary tribunal also handed Koulibaly a two-match ban after he was sent off for sarcastically applauding the referee when he was booked for a foul.

In addition to the next two home matches, an Italian Cup clash with Benevento, and a league match against Sassuolo, the tribunal ordered closed the section of the San Siro stadium occupied by Inter's "ultra" fans for a third game, a league contest against Bologna.

Ancelotti: 'We will walk off'

After Wednesday's 1-0 defeat, Napoli coach Carlo Ancelotti said he had repeatedly asked the officials to halt the match after some Inter fans had made monkey noises directed at Koulibaly – but that they declined his requests.
Announcements (using the P.A. system) were made but the match continued," Ancelotti told Italian broadcaster Sky.

"Next time we'll stop the match by leaving the pitch, even if that means maybe forfeiting the match."
The former Bayern Munich coach also said that he believed the racial abuse had contributed to the 27-year-old Senegal international losing his temper and being handed two yellow cards in quick succession.

After the match, the defender took to Twitter to speak of his pride about his heritage and to apologize for the sending off.

"I'm sorry about the defeat and especially to have left my brothers! But I am proud of the color of my skin. Of being French, Senegalese, Neapolitan: a man," he wrote.

Napoli went on to lose the match 1-0 after Lautaro Martinez scored for Inter in injury time.
This is the just latest incident of racism to blight Italian football. In October, Serie A champions Juventus were fined €10,000 ($11,500) and had part of their stadium closed for racist behavior directed at Koulibaly by some of their fans.  In another example, Sulley Muntari walked off the pitch during a Serie A game in April 2017 in response to racial abuse.

These are just a couple of examples of racist incidents in football  in recent years, and these have by no means been limited to Italy.

Inter Milan fan dies after being hit by vehicle

A fan of Italian football club Inter Milan has died after being hit by a car during clashes between rival fan groups prior to a league game. The incident is under investigation. (27.12.2018)

A French court has sentenced four men for blocking a black man from entering a subway train on their way to a Champions League game in Paris. The men have denied that racism motivated their actions. (03.01.2017)

Racist and xenophobic sentiments are widespread in Russian football, but a small group of fans are hoping to change that. The World Cup could provide a good opportunity to transform the country's supporter culture. (15.06.2018)

Striker Mario Balotelli scored on his first appearance for Italy in four years on Monday. But his comeback display was soured by an offensive banner hung in the crowd, which Balotelli soon responded to. (29.05.2018)