In Kinshasa, the capital of the Democratic Republic of Congo, major roads have become safer for pedestrians crossing. Intelligent robots regulate the traffic and prevent fatal accidents. 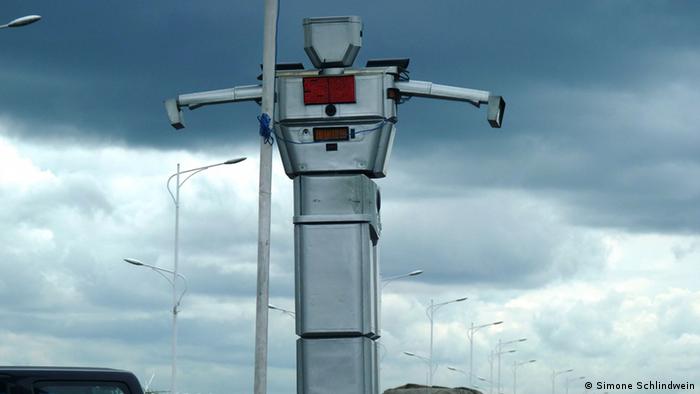 The Democratic Republic of Congo's capital Kinshasa has close to 15 million inhabitants. Traffic jams and transport chaos are permanent features. In recent years there have been many positive changes in Kinshasa - main roads have been tarred and enlarged. But since drivers no longer have to navigate their vehicles around potholes, they now drive faster.

With her school bag over her shoulder, seventeen-year-old Chery Makamba is standing at the edge of the eight-lane Lumumba Boulevard which runs from the city center to the airport. 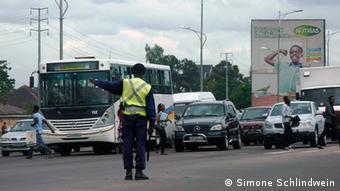 Kinshasa's roads can be dangerous for pedestrians, especially children.

When there are no traffic jams, the cars really whizz past. However, there are numerous schools right along this boulevard and it used to be a very risky maneuver for the schoolchildren to reach the bus stop on the opposite side. Now there is a gigantic robot at the side of the road that towers above the children's heads. It beeps, flashes and changes the light situated on its head from green to red so that the traffic stops and the children are able to cross the road.

Chery is delighted by the robot. "Whenever the robot changes its light to red for the traffic, we pedestrians can cross the road," she says happily. The robot can even speak, she adds. If touched it exclaims "Don't touch me!" Before the robot was installed there had been a traffic light but it rarely worked. The robot functions extremely well, Chery says and "there are fewer accidents than before."

Developed by a mother

There were almost 500 fatal accidents along this road last year. Most of the victims were pedestrians crossing from one side to the other and many of them were schoolchildren. This alarmed Therese Kirongozi.

The 40-year-old mother of three children, who also go to a school on Lumumba Boulevard, is the president of an association of women working in the field of technology. She had the idea to develop a robot to guide the children across the road safely. 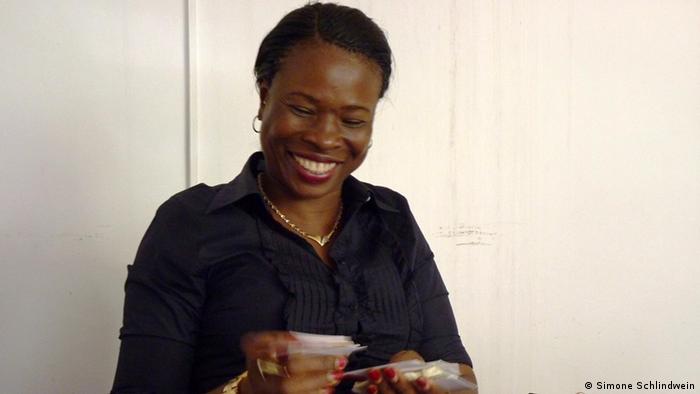 Therese Kirongozi is the developer and innovative mind behind the robots.

So far Kirongozi has designed two robot types: one helps pedestrians to cross the road, the other is installed at a crossing where it regulates the traffic. Equipped with a camera, it records everything that happens around it and at night operates with infra-red radiation. All data is stored in a control center. "The data can be used by the government to safeguard traffic. You can monitor accidents and find those who caused them and so on," Kirongozi explains.

Only 74 traffic lights in the whole country

DR Congo's road network is extremely neglected. After 20 years of civil war, the government has only in the last couple of years begun to improve transport routes and to tar roads - especially in the capital Kinshasa which was famous for its traffic jams. But little was invested in traffic safety. There are only 74 traffic lights in the entire country - which covers an area as large as western Europe. And these traffic lights often don't work due to power cuts. The robots on the other hand are run by solar power. Kirongozi has more ideas she would like to integrate into a new prototype. But first she is hoping the state will buy her robots. Up till now she has been financing them herself. She has now founded a company and is trying to market the robots in neighboring countries. 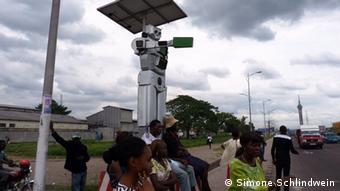 The intelligent robot is much more than a simple traffic light.

The Congolese authority for traffic regulation is very enthusiastic about the robots, says director Willy Vale-Manga, as there are 150,000 kilometers (93,000 miles) of road throughout the country and most have been modernized. "This also means we need modern systems for traffic safety. We have engaged in partnerships with private companies and the public sector. This has helped." The authorities have now installed 10,000 road signs and 60,000 road markings in addition to the 74 traffic lights. Vale-Manga said Kirongozi's company has now been given a patent for the robots "for the time after the experimental phase. This robot is more than a simple traffic light. It registers the speed at which cars are traveling and can even report fires - all this is integrated in this intelligent robot,” he enthuses.

Meanwhile the robots on Kinshasa's streets have become a big attraction. The Congolese are proud of so much inventiveness and engineer Kirongozi has become a heroine for the initiative she has shown. The plan now is to place her robots at crossings in other big cities in the country.

More than just a vision: billions of people in Brazil and around the world will witness a paraplegic youth kick off the opening game at the 2014 World Cup in Brazil with mind-controlled robot legs. (11.06.2014)

Dozens of people have been killed in the Democratic Republic of Congo (DRC) after an overloaded goods and passenger train careered off the tracks. The incident is one of several in recent years on the neglected network. (23.04.2014)

The never-ending war in eastern DRC

20 years after the 1994 genocide in Rwanda, the small country in the heart of Africa is now peaceful. But across the border in the eastern Democratic Republic of Congo, armed conflict involving Rwandan militia continues. (04.04.2014)