Insurance giant warns of rising costs due to climate change | Business| Economy and finance news from a German perspective | DW | 01.01.2010

Insurance giant warns of rising costs due to climate change

A report by German insurance company Munich Re says 2009 was a year of relatively few natural disasters. But it warns that climate change remains a threat in 2010 and beyond, impacting on insurance costs. 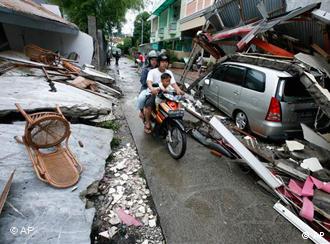 Indonesia suffered the most deadly natural disaster in 2009 when an earthquake killed 1,200 people

In an annual look at the cost of natural disasters, Munich Re, one of the world's largest reinsurers, said that natural catastrophes took many fewer lives and caused much less damage on average in 2009 than in the previous decade.

The single most deadly event was a 7.6 magnitude earthquake in Indonesia on September 30, killing nearly 1,200 people in and around the city of Padang, on the island of Sumatra.

The Munich-based company said that in monetary terms too, 2009 losses were also much lower than in previous years. The report pointed out that insurers' losses from natural disasters fell by more than half in 2009, thanks to fewer hurricanes and earthquakes, although climate change contributed to a significant increase in damages and losses in the US.

The most expensive single event was Klaus, a winter storm that hit northern Spain and southwestern France in January 2009. Klaus left more than one million people without electricity while causing economic losses of over 3.5 billion euros and insured losses of about 2 billion euros. 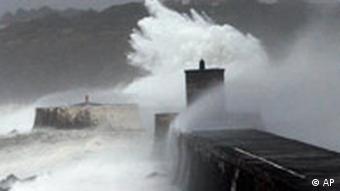 "Despite the lack of severe hurricanes and other mega catastrophes, there were a large number of moderately severe natural catastrophes," Munich Re’s head of geo risk research, Peter Hoeppe, pointed out, warning that "the trend towards an increase in weather-related catastrophes continues."

He believes that the catastrophes are related to climate change, and that at least part of the cause must lie at the location of the disasters.

"And we know from climate scientists that because some changes have occurred, that it has become warmer, that there is more humidity in the atmosphere because the oceans have warmed up as well. Everything we learn from climate scientists fits together perfectly - that climate change is causing extreme weather events to intensify."

Munich Re company board member Torsten Jeworrek expressed disappointment at the lack of a significant breakthrough at the Copenhagen climate summit in December, especially given an almost three-fold rise in weather-related natural catastrophes since 1950.

"We need as soon as possible an agreement that significantly reduces greenhouse gas emissions because the climate reacts slowly and what we fail to do now will have a bearing for decades to come," Jeworrek said.

The Munich Re report warned that climate change remains a threat in 2010 and the decades to come, adding that the failed Copenhagen summit is bound to make insurance costs rise in the future.

All around the world, glaciers are melting as a result of global warming. Switzerland has begun preparing itself for the effects of this process and boasts an exemplary catastrophe-prevention strategy. (14.10.2009)

The EU recently provided 7.1 million euros of disaster relief in one week, and claimed that its disaster preparedness lessened the damage done by Typhoon Ketsana. Is this a sign of the EU's new international stature? (08.10.2009)

Police have carried out searches over the conduct of officers in the German state of North Rhine-Westphalia. They are suspected of participating in far-right extremism in Whatsapp groups.