No envelope, inexpensive, perfect for short messages — 150 years ago, the first postcard was dispatched in Germany. The medium was enthusiastically adopted. 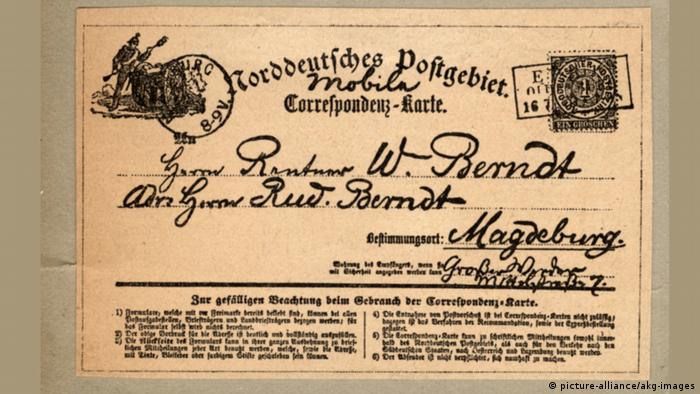 The postcard widely believed to be the first to ever be sent on its way in Germany is a card with a small picture of a soldier. August Schwartz, a bookseller in the northern German city of Oldenburg, sent it to a relative in Magdeburg on July 16, 1870, shortly before the outbreak of the Franco-Prussian War.

However, it is not entirely certain whether Schwartz' card was really the very first, according to Veit Didczuneit, head of collections at the Berlin Museum for Communication. "No one has seen this postcard for a long time, it needs to be examined more closely," he told Germany's KNA news agency.

Whichever came first, 150 years ago, Germans were wary of the new medium that would go on to be immensely popular all over the world. They worried that "servants could read messages sent to their masters" and that the art of letter-writing would fall by the wayside, Didczuneit said.

A few years earlier, Heinrich von Stephan, a German postal reformer who founded the Museum of Communication in Berlin, had been an outspoken advocate of the postcard. At the 1865 Austro-German Postal Conference, he proposed establishing the "Postblatt" (open post sheet), but the idea was rejected.

It was the Austro-Hungarian postal authorities who first adopted the concept. The governmental "correspondence card" was introduced there in 1869, marking the official beginning of a new form of communication.

In 1872, sending a postcard in Germany cost just half the postage of a standard letter, which contributed greatly to its popularity. In large cities, there were several mail deliveries a day, meaning that a greeting card would often reach the recipient within a few hours. People could also send a double card that included a prepaid answer card, which is how it became a widespread format for quick greetings and conveying appointments, much like today's text messages.

"In 1885, the picture postcard was officially approved in Germany; before that, the postal service had merely tolerated it for years," Didczuneit said. In the 1890s, the discovery of chromolithography made multi-colored prints possible.

Postcards were a fast seller

According to Didczuneit, the illustrations on the cards were initially all about "leaning about the world." Picture postcards at the turn of the century covered popular sights and travel highlights, holiday and wedding greetings, various topics of gossip, as well as excitement over the latest technological developments or natural disasters.

Back in 1900, the postal service carried far more cards than it does today — about one billion. In 1982 the number of postcards sent amounted to 877 million, but by 2018 tht number had dropped considerably, to 155 million. With current travel warnings and restraints in place during the coronavirus pandemic, the downward trend is likely to continue during the 2020 summer vacation period.

Even 75 years after the end of World War II, Bulgarians can't agree whether they were occupied by the Soviet Union, or liberated. A personal account. (07.05.2020)

How the postcard became a hit 150 years ago

A new exhibition at Berlin's Museum for Communication celebrates the 150-year history of postcards. Here's how Germans enthusiastically adopted the medium to share important news — and the latest gossip. (21.08.2019)

Wish You Were Here: 150 Years of Postcards

Why China is skeptical of local journalists working for Western media 21.03.2022

State media have published a series of critical articles against Chinese journalists, accusing them of helping foreign media with "anti-China reports."