Curious about entrepreneurship made in Germany? Here's a look at the state of the German startup ecosystem — from funding opportunities, to obstacles founders are facing and the country's hottest startup hubs. 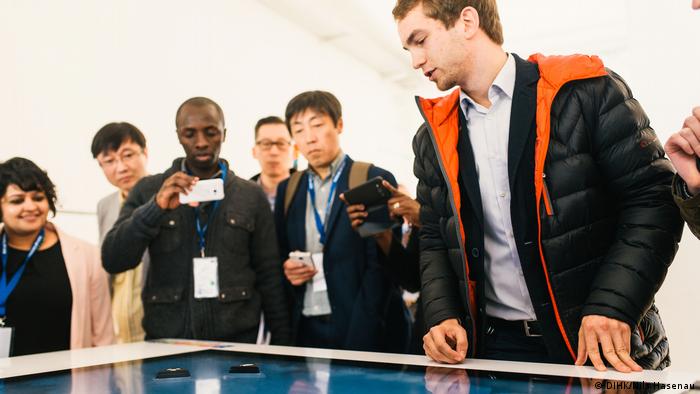 Although she spent less than one week in Germany, it appears that the country's startup scene left a lasting impression on Indian entrepreneur Pronita Saxena.

"I'm really excited about the amount of support for domestic and foreign startups here," the founder of energy venture Citizengage said. Mathias Gräder, innovation director of Finnish IoT platform Wapice, was even more enthusiastic: "The domestic network of other companies as well as customers and investors are almost a guarantee for success."

Read more: Indian and German startups to hook up through exchange program

Saxena and Gräder were among a group of 46 entrepreneurs from around the world who visited Berlin, Hamburg and the Ruhr Valley area in western Germany for five days in October as a part of the "Start.up! Germany" tour. Put on by theGerman Chambers of Commerce Abroad, the week-long roadshow gave foreign founders opportunities to explore three of Germany’s most vibrant startup hubs and pitch their ventures to investors, the media as well as corporations like Airbus and tech giant SAP.

"Startups have become a well-established sector in all of Germany's regions," the minister said.

But what does Germany's startup ecosystem really have to show for? The German Startup Monitor, an annual overview of the German startup scene, provides some answers. Shedding light on factors such as funding, management and digitization, the survey reveals what is going well around here — and where there's room for improvement.

Every tenth founder in Germany is foreign-born

When it comes to nationality, Germany's startup landscape is pretty diverse: With an average of almost 30 percent of startup staff not being German, the share of foreign-born startuppers is disproportionately high.

But 60 percent of founders surveyed say that number could be even higher — if it weren't for the infamous German bureaucracy, which requires a slew of time-consuming office trips. Aside from too much red tape, the language barrier presumably also stymies the hiring of skilled foreign workers. This is a particular problem in large cities like Berlin, where every other startup employee is hired from abroad.

Almost two thirds of German founders says the domestic startup landscape will benefit from the immigration of foreigners. 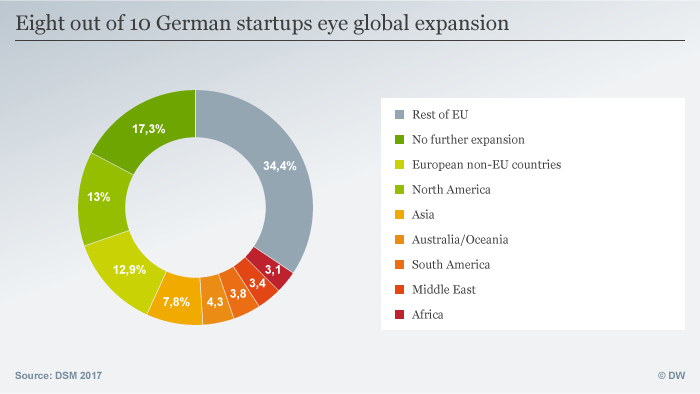 When it comes to expanding beyond Germany's borders, eight out of 10 German startups say they are planning (further) internationalization, especially to other European countries, North America and Asia. But going global is also a challenge: Two out of three founders cite differences in the legal systems and regulation as the biggest hurdles to expansion. Other roadblocks are conflicting tax systems, adapting one's product to local customer needs, language barriers and cultural differences.

German Accelerator, a government-backed program with office in Silicon Valley, New York City and Singapore, is widely regarded as a valuable resource for entrepreneurs looking to take their startups international.

To date, startups surveyed in the German Startup Monitor have collected almost 2.1 billion euros ($2.47 billion) in external capital and plan to raise an additional one billion in the next 12 months. About one third of startups received capital from the government, according to the report.

Important sources of federal financing are the High-Tech Founders' Fund along with a number of federal ministry of economic affairs programs: EXIST, which aims at "improving the entrepreneurial environment at universities and research institutes," INVEST, which subsidizes angel investments, as well as two instruments to widen the access to venture capital, which  startups need to become high-growth companies: the ERP/EIF Growth Facility and the "coparion" funds.

"Startups interested in coming to Germany should have a close look at the federal funding available to … foreigners," Lukas Gabriel Wiese of the German Startups Association told DW. He hopes for more future initiatives that attract foreign founders to Germany, for instance via a startup visa program similar to those Canada, Israel and Chile have in place. "We think that the German startup ecosystem can really benefit from the influx of foreign founders." 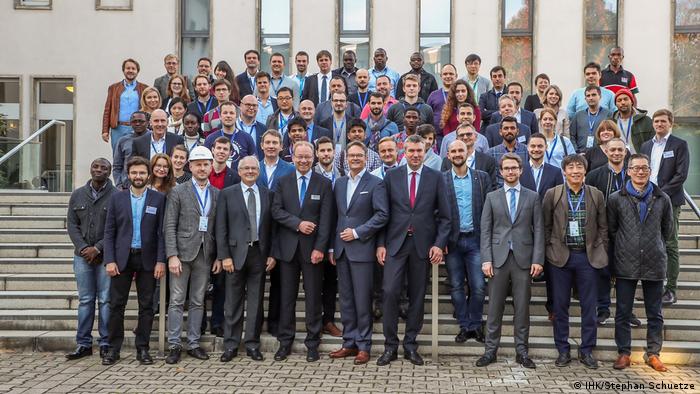 46 startups from four continents and 16 different countries participated in the Start.up! Germany roadshow

Here are a few other key statistics about Germany's startup landscape: The average German founder is 35 years old; Eight out of 10 German startups see a significant impact of the digitalization on their business models; more than half of those startups aware of clusters are currently part of a regional cluster (with key expectations being knowledge transfer, co-operations and visibility); The share of female founders is still less than 15 percent; The average German startup has 13.2 employees (including founders) and plan on growing by 7.5 new employees, And nine out of ten founders evaluate their current business situation optimistically — although they're more reserved regarding the future prospects for their startups.

Maybe not surprisingly, the German capital with its 3.7 million inhabitants is considered the country's most attractive startup environment for founders, not least due to its international workforce.

"Germany has more than one Silicon Valley," Tobias Kollmann, professor für e-business at the University of Duisburg-Essen, told DW. Here, startups tend to cluster around universities that foster entrepreneurship. A prime example is the Technical University of Munich, which more than 3 percent of all German founders call their alma mater.

Most founders (86 percent) stay loyal to the place where they first launched their ventures. Of the 14 percent who moved their headquarters elsewhere, three quarters stayed in the same state, a fact Kollmann attributes to the diverse corporate culture of Germany's famed "Mittelständler" — small and medium-sized businesses (SMEs), which are often global leaders in their industry.

"Roughly half of German startups cooperate with established companies, which have offices across the country," the e-business expert said.

So where does this leave us? Minister Zypries puts it this way: "The government needs to continue its work on rapidly completing the digital single market, strengthening digital education and infrastructure, passing an immigration act to facilitate the recruitment of foreign staff, and continuing to promote cooperation between startups and SMEs."

The final frontier — investing in startups in high-risk economies

Opportunities for business rarely come to mind when countries like Afghanistan or Bolivia come up. That’s something that young entrepreneurs are trying to change, and they are getting some support from Germany. (14.09.2017)

Where to set up my start-up? Since the Brexit vote, Berlin has hopes of surpassing London as the top location in Europe. In 2015, startup founders in the German capital netted more than €2bn from investors. (13.10.2016)

Dozens of German startups have tried to make a name for themselves in Texas at South by Southwest (SXSW), an annual conference combining tech, film and music. Here are seven of the most promising participants. (17.03.2017)

Is Estonia the new Silicon Valley?