There have been scenes of violence in Hamburg as protesters vented their anger at plans to carry out evictions at a theater. The building, home to squatters, has become a popular rallying point for activists. 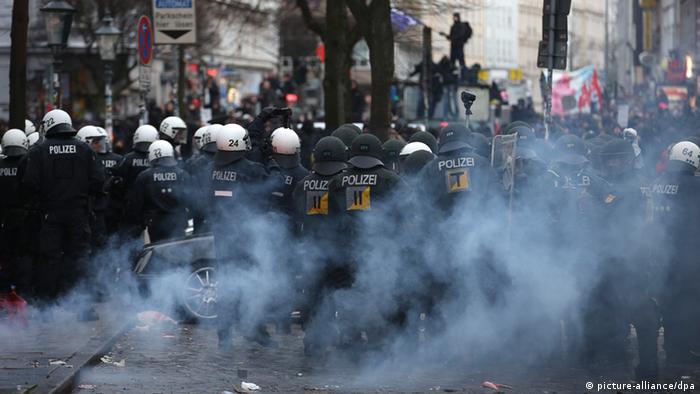 Stones and bottles were thrown at police as more than 7,000 people demonstrated in Hamburg on Saturday.

Officers responded with baton charges and water cannon, breaking up the protest over the eviction of the left-wing Rote Flora cultural center.

"There was a mood of aggression from the outset," said police spokesman Mirko Streiber. "We came under serious attack. It became more violent than anything we have experienced in a long time."

More than 100 police officers were said to have been injured in the violence.

An unspecified number of protesters were also hurt. "Through the overwhelming use of batons, pepper spray and water cannon, there were numerous injuries," said a statement by organizers.

Some 19 people were said to have been arrested, suspected of breach of the peace. Windows were broken in surrounding properties, including an office of the center-left Social Democrat political party, and there was damage to police cars.

The Rote Flora centre - a theater in the city's Schanzenviertel area - was first occupied by squatters in 1989. Since then it has become something of a rallying point for left-wing activists, with regular summer protests coinciding with a local street fair. The latest protests were sparked by the threat of eviction for those living in the theater since it was bought from local authorities by a developer.